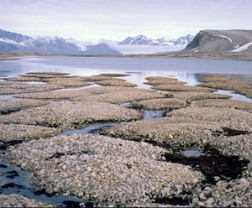 Global Warming continues to be approaches by governments as a “luxury” item, rather than a matter of basic human survival. Humanity is being taken to its destruction by a greed-driven elite.

These elites, which include ‘Big Oil’ and other related interests, are intoxicated by “the high” of pursuing ego-driven power, in a comparable manner to drug addicts who pursue an elusive “high”, irrespective of the threat of pursuing that “high” poses to their own basic survival, and the security of others.

Global Warming and the pre-emptive war against Iraq are part of the same self-destructive prism of a political-military-industrial complex, which is on a path of mass planetary destruction, backed by techniques of mass-deception.

“The scientific debate about human induced global warming is over but policy makers – let alone the happily shopping general public – still seem to not understand the scope of the impending tragedy. Global warming isn’t just warmer temperatures, heat waves, melting ice and threatened polar bears. Scientific understanding increasingly points to runaway global warming leading to human extinction”, reported Bill Henderson in CrossCurrents. If strict global environmental security measures are not immediately put in place to keep further emissions of greenhouse gases out of the atmosphere we are looking at the death of billions, the end of civilization as we know it and in all probability the end of humankind’s several million year old existence, along with the extinction of most flora and fauna beloved to man in the world we share.

The Stephen Harper minority government backed by Alberta “Big Oil”, the U.S. Republican President Bush administration, and a confederacy of other elites associated with a neo-conservative oriented political-military-industrial complex, has only sought to “buy time” against his critics, (and mount a disingenuous public relations campaign under a new Minister of the Environment). It is apparent that The Stephen Harper government has no commitment to providing any leadership on Canadian or global achievement of the minimum standards set on greenhouse gas emissions reductions under the Kyoto Protocol.

There are ‘carbon bombs’: carbon in soils, carbon in warming temperate and boreal forests and in a drought struck Amazon, methane in Arctic peat bogs and in methane hydrates melting in warming ocean waters. “For several decades it has been hypothesized that rising temperatures from increased greenhouse gases in the atmosphere due to burning fossil fuels could be releasing some of and eventually all of these stored carbon stocks to add substantially more potent greenhouse gases to the atmosphere,” Bill Henderson further elaborates.

Given time lags of 30-50 years, we might have already put enough extra greenhouse gases into the atmosphere to have crossed a threshold to these bombs exploding, their released greenhouse gases leading to ever accelerating global warming with future global temperatures maybe tens of degrees higher than our norms of human habitation and therefore extinction or very near extinction of humanity.

Ticking Time Bomb by John Atcheson , a geologist writing in the Baltimore Sun, is the best and almost only mainstream media explanation of runaway global warming and how close we are to extinction.

“There are enormous quantities of naturally occurring greenhouse gasses trapped in ice-like structures in the cold northern muds and at the bottom of the seas. These ices, called clathrates, contain 3,000 times as much methane as is in the atmosphere. Methane is more than 20 times as strong a greenhouse gas as carbon dioxide.”

Stephen Connor reported in the February 16, edition of The Independent that, “The long-term stability of the massive ice sheets of Antarctica, which have the potential to raise sea levels by hundreds of metres, has been called into question with the discovery of fast-moving rivers of water sliding beneath their base.”

“Scientists analysing satellite data were astonished to discover the size of the vast lakes and river systems flowing beneath the Antarctic ice sheets, which may lubricate the movement of these glaciers as they flow into the surrounding sea”, Mr. Connor further reports.

The discovery raises fresh questions about the speed at which sea levels might rise in a warmer world due to the rate at which parts of the ice sheets slide from the land into the ocean, scientists said at the American Association for the Advancement of Science in San Francisco.

“We’ve found that there are substantial subglacial lakes under ice that’s moving a couple of metres per day. It’s really ripping along. It’s the fast-moving ice that determines how the ice sheet responds to climate change on a short timescale,” said Robert Bindschadler, a NASA scientist at the Goddard Space Flight Centre in Maryland, one of the study’s co-authors.

“We aren’t yet able to predict what these ice streams are going to do. We’re still learning about the controlling processes. Water is critical, because it’s essentially the grease on the wheel. But we don’t know the details yet,” Dr. Bindschadler said. “Until now, we’ve had just a few glimpses into what’s going on down there. This is the most complete picture to date about what’s going on,” he said.

The findings, to be published in the journal Science, came from satellite surveillance of the surface elevation of the ice sheets, which found that they rise or lower depending on the amount of water flowing between the base of the ice sheet and the rock beneath.

The scientists identified many regions of the ice sheet either rose or deflated between 2003 and 2006 as a result of water movements below. Water would be capable of this because it is highly pressurised under the weight of the overlying ice, they said.

Glaciologists have known for some time that water exists under the Antarctic ice sheets – which can be hundreds of metres thick – but they were surprised to find how much water is involved and the speed at which it moves from one subglacial reservoir to another, said Helen Fricker at the Scripps Institution of Oceanography in San Diego.

“We didn’t realise that the water under these ice streams was moving in such large quantities, and on such short time scales. We thought these changes took place over years and decades, but we are seeing large changes over months. The detected motions are astonishing in magnitude, dynamic nature and spatial extent,” Dr Fricker said.

The West Antarctic ice sheet is the second biggest on the continent, and the rate at which ice flows from it to the Ross ice shelf, and then ultimately into the sea, is critical in assessing the likely impact of climate change on global sea levels.

The study provides evidence that subglacial water is stored in a linked system of reservoirs underneath the ice and can move quickly into and out of those reservoirs. This activity may play a major role in controlling the rate at which ice moves off the continent, Dr Fricker said.

“The links between ice stream activity and the climate are not well understood. To predict how the ice sheets might respond to global warming, this new information is vital as it gives us a more complete picture of what is happening under the ice,” she said.

The study was conducted using the Icesat satellite. It carries a laser altimeter instrument to detect changes as small as 1.5 centimetres in the elevation of the ice sheet’s surface, from an orbit of 400 miles above the earth. “From 600 kilometres up in space, we were able to see small portions of the ice sheet rise and sink,” Dr Bindschadler said.