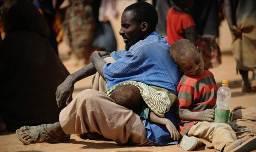 It comes as the UK pledged $80 million in emergency aid to help millions of people affected by the disaster.

The United Nation’s Children’s Fund believes about 2 million young people are malnourished because of the drought in the Horn of Africa.

UNICEF has just airlifted five tonnes of food and medicine to children in Baidoa in southern Somalia.

The delivery is the first since the Islamist militant group Al Shabaab, which controls most of Somalia, agreed to let foreign relief agencies into the area.

UNICEF representative to Somalia, Rozanne Chorlton, is adamant no payments were made to Al Shabaab to let the aid through.

“We’ve been asked occasionally in different places but then we’ve explained what we do and they did not pursue the claims,” she said.

An estimated 400,000 people are now in the overcrowded Dadaab refugee camp in neighbouring Kenya and thousands more are crossing each day into the country and into Ethiopia.

Speaking at the Dadaab refugee camp in Kenya, UK aid secretary Andrew Mitchell said the situation is getting worse.

“Well there is no question this is an extremely grave crisis. The real question is whether the international community, by putting its shoulder to the wheel, can stop it turning into a catastrophe,” he said.

“These levels of malnutrition we’re seeing, particularly among children and mothers with very young children, [are] almost unprecedented.”