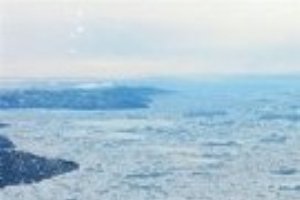 COPENHAGEN (AFP) – Greenland’s ice cap, which covers more than 80 percent of the island, is melting faster than expected because of global warming, a Danish researcher said on Monday.

The 1.8-million-square-kilometre (695,000-square-mile) ice cap, which accounts for 10 percent of the planet’s fresh water, is losing about 257 cubic kilometres (62 cubic miles) of ice per year.

In 2080, it is expected to lose 465 cubic kilometres (111 cubic miles) per year, according to new estimates presented by a Danish-US team of scientists at the International Research Center in Fairbanks, Alaska.

The net loss in 2080 would be “81 percent greater than today” and would cause “sea levels to rise by 107 millimetres” (4.2 inches), the team’s head researcher Sebastian Mernild said in a statement received in Copenhagen.

“The ice cap’s melting season beat a new record in 2007, corresponding to a loss of 50 percent of the ice’s total surface. And this record will not be the last one,” he warned.

“The ice melt at the end of the 2070s will rise to 66 percent, or about 1.204 million square kilometres,” said Mernild, adding that the melting process was “occurring at faster rate than previously predicted.”

The research team’s calculations, based on climate models and the UN climate panel’s predicted scenarios, showed that “the average air temperature (in Greenland) will rise by some 2.7 degrees by the end of the century,” he said.