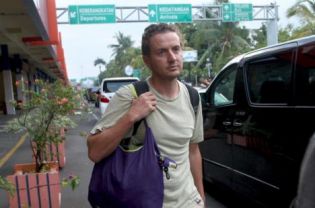 Greenpeace has lashed out at allegations made by a legislator that one of its top British activists managed to skirt an entry ban into Indonesia by using a false passport.

Nur Hidayati, Greenpeace’s country representative for Indonesia, said on Tuesday that Andy Tait entered the country using a valid passport and that attempts to deport him last Saturday failed because the purported entry ban was riddled with errors.

She was responding to allegations of passport falsification raised by Tubagus Hasanuddin, deputy chairman of House of Representatives Commission I, which oversees defense and foreign affairs.

“There must be due legal process by the police to investigate this document falsification,” Tubagus, an Indonesian Democratic Party of Struggle (PDI-P) lawmaker, had said.

He also said Mas Achmad Sentosa, a member of the Judicial Mafia Eradication Task Force, should be investigated for his intervention at Jakarta’s Halim Perdanakusuma Airport, where Tait, a Greenpeace UK forest campaigner, was stopped by immigration officials.

Desmon Mahesa, a Great Indonesia Movement Party (Gerindra) legislator on House Commission III, which oversees legal affairs, said the task force should be evaluated because of indications that Sentosa had used his authority for personal reasons in helping Tait evade a potential deportation.

“Why should task force members get away with breaking the law in the name of the people?” Desmon said.

Sentosa said he was simply doing his job by questioning why Tait faced deportation or if the entry ban against him was even valid. The Directorate General of Immigration has already denied ever issuing an entry ban for the Greenpeace representative.

The controversy came days after John Sauven, the Greenpeace UK director, was turned back at Soekarno-Hatta International Airport by immigration officials last Thursday despite having a valid visa. The government has since said his presence posed a threat of “instability and disorder” to the country but did not elaborate.

In a statement on the Greenpeace UK Web site on Monday, Sauven said he had been scheduled in the country to “meet with a number of government officials, the UK ambassador and one of the country’s largest palm oil producers. I was also planning to bear witness to the deforestation caused by Asia Pulp and Paper in Sumatra for myself.

“I had the correct visa, issued by the Indonesian embassy in London, but apparently that doesn’t count for much when you are part of an organization fighting companies who have powerful connections in government.”