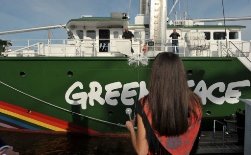 Greenpeace activists on Monday painted “Stop Subsidies” in large white letters on the side of four fishing trawlers in Spain’s northwestern port of Vigo to denounce overfishing.

The trawlers use nets that are dragged across the seabed to capture their catch, a method that Greenpeace said “destroys everything in its path”.

“Greenpeace wants to help the European Commission to identify excess fishing capacity, which is one of the major problems of our seas,” said the evironmental group’s campaign manager for the defence of oceans, Celia Ojeda.

Spain’s fishing fleet is by far the largest in Europe with a catch amounting to 24.2 percent of the European Union’s total haul.

It will have received more than 1.1 billion euros ($1.4 billion dollars) in subsidies between 2007 to 2013, according to a Greenpeace report issued earlier this month.