Half of India affected by extreme drought 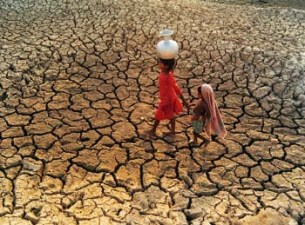 Below normal monsoon rains have been responsible for the drought Nearly half of India’s districts have been hit by drought that could affect the production of rice, the country’s farm minister has said.

Sharad Pawar said 246 districts in 10 states had been declared as drought affected. India has some 600 districts.
Separately, authorities in southern Andhra Pradesh state say they are probing whether the suicides of 20 farmers are linked to the drought.

This monsoon season has brought 29% less rainfall than normal.

Rice production in the country could decline by 10 million tonnes this year because of the drought, Mr Pawar said.
India produced nearly 100 million tonnes of rice during 2008-2009, according to official figures.
“Due to the expected reduced production of rice, there could be pressure on availability and market price,” he added.

With food prices rising, Mr Pawar said the government was planning to release wheat and rice from its stocks in the open market to keep prices in check.
Leading economist and member in charge of food at India’s Planning Commission Abhijit Sen told a newspaper that he did not “foresee a situation where we need to import food”.
Separately, the government in Andhra Pradesh has announced an investigation into the suicides of 20 farmers in a little over a month.
The opposition parties have said the farmers were taking their lives because of the drought.
Chief minister YS Rajashekhara Reddy said officials were “conducting an in-depth probe into all the suicides by farmers to establish the reason”.
Monsoon rains are critical to India’s farm prospects, which account for a sixth of its economic output.
Up to 70% of Indians are dependent on farm incomes, and about 60% of India’s farms depend on rains. Irrigation networks are dismissed by critics as inadequate.
The summer rains are crucial to crops such as rice, soybean, sugarcane and cotton.