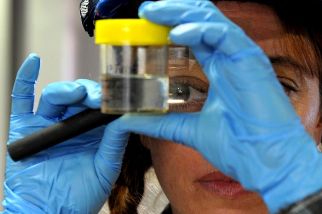 A team of French and Australian oceanographers have discovered the seabirds in the Southern Ocean have four times the mercury levels of aquatic birds elsewhere.

The toxic element has come from both man-made and naturally occurring sources and while the birds seem to be coping, the same cannot be said for the region’s fish.

Seabirds like albatross and petrels are the mega-fauna above the water, while whales, seals and penguins are the big predators below.

CSIRO oceanographer Dr Steve Rintoul is part of a team led by French oceanographer Daniel Cossa to be the first to study mercury concentrations in the Southern Ocean.

“The mystery has been that previous measurements have shown that albatross and petrels in the Southern Ocean have extremely high levels of the toxic form of mercury in their tissues and it is a bit odd because we think of the Southern Ocean as such a pristine place and mercury is a pollutant,” he said.

“The toxic form of mercury is called methylmercury and we found some of the highest levels yet measured in open ocean waters in the Southern Ocean.”

The mercury measurements were made on the Aurora Australis in 2008. It is currently on the same path, taking expeditioners to the Douglas Mawson centenary commemorations at Commonwealth Bay.

The high mercury levels are due to the upwelling of ocean currents and the high levels of bacteria which turn mercury into methylmercury.

“Once it is in the water it slowly starts getting incorporated into the food web and the higher you go up in the food web the more and more concentrated it becomes,” Dr Rintoul said.

“So by the time you get to the larger animals like albatross or petrels or seals or large fish, it is reaching very high levels.”

But Dr Rintoul says species have evolved to cope with the mercury.

“That is the other part that is interesting about this is that the mercury is high here both for natural reasons and because of human activities that have introduced additional mercury, but the species have evolved to cope with these high levels of mercury,” he said.

“In fact, levels of mercury that we understand would kill similar species of birds at other latitudes.”

Over-fishing and illegal fishing is increasingly pushing fishing operations into the Southern Ocean.

Dr Rintoul says the human part in this complex food web is unknown.

“There are very few measurements of mercury in the tissue of large fish or other organisms that humans might eat in the Southern Ocean,” he said.

“So we actually don’t know what the human threat is but it would be a good idea to make those measurements before we eat large quantities of Southern Ocean fish just to make sure.”