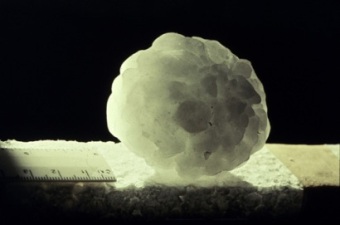 Huge hailstones, lightning, strong winds and heavy rain hit the Eyre Peninsula, west of Adelaide, on Monday morning before moving across the state.

State Emergency Services (SES) west coast regional duty officer Tony Stockham said they have been have been inundated with calls, while efforts made by SES crews to reach call-out locations had been hindered.

“In some areas the roads have been all but impassable because of the size of the trees that have fallen,” he said.

He said strong winds had torn roofs from farming sheds, and there had been many reports of damage to cars and crops as hailstones the size of golf balls fell in Elliston.

SES and CFS crews have been working to repair the roof of the hospital at Elliston, which was damaged at about 9am (CST).

“The amount of hail we had and the velocity of it, it actually formed solid blocks of ice in the gutters and the water was coming back in under the roof because it couldn’t get out through the normal gutters,”
Mr Stockham said.

He said the storm had moved east from Elliston to Cleve and north on to Whyalla, before heading south across the Spencer Gulf towards Adelaide.

The weather bureau has issued storm and gale warnings as the severe weather continues to move across the state.

ETSA crews have been working to restore power to nearly 2000 homes in the west coast region.