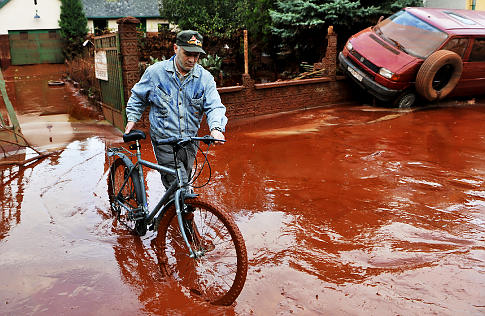 Hungarian officials on Friday played down the threat of disastrous pollution to the Danube river from an industrial accident in Hungary, while its prime minister said the situation was under control.

The death toll from Monday’s disaster meanwhile rose to seven, officials said, and one person was still missing.

Prime Minister Viktor Orban, who declared a state of emergency in three counties earlier this week, insisted there remained little risk of the pollution running into the Danube, Europe’s second-longest river.

“The good news is that we have succeeded in bringing it under control and very probably waters threatening the environment will not enter the Danube, even on Hungarian territory,” Orban said during a visit to neighbouring Bulgaria.

He praised rescue teams — who were for dropping acid and gypsum into the Danube and its tributaries from planes to neutralise the alkaline effects of the toxic sludge — for “preventing the heavy metals and the alkaline from travelling further downriver.”

Toxic sludge from an alumina processing plant in western Hungary burst out of a storage reservoir on Monday, pouring into villages and killing all life in at least one small river.

Dead fish were also seen floating in the Danube on Thursday, but environmental officials on Friday said that water quality samples were close to normal in the river.

On Friday afternoon, alkaline levels showed a reading of pH 8.3 at Komarom, around 80 kilometres (50 miles) west of Budapest, down from earlier in the day, according to a spokeswoman for the disaster relief services, Jyorjyi Tottos.

The level is only slightly higher than normal and is not harmful to the environment, Tottos said.

Water alkalinity is a measure of river contamination and on a scale of 1-14, pH values of 1-6 are acid, between 6 and 8 are neutral, and readings of 8-14 are alkaline.

Authorities said they expect the clean-up in two of the hardest-hit villages, Kolontar and Devecser, to be finished next week.

But environmental groups rang alarm bells about the longer-term consequences.

In Vienna, Greenpeace said it had found “surprisingly high levels” of arsenic and mercury in the caustic, foul-smelling red sludge that escaped from the reservoir in Ajka, 160 kilometres west of Budapest.

“We found levels of arsenic, mercury and chrome and the arsenic level especially was double what we expected, double what is usually contained in such red sludge,” said a campaigner and chemist for the organisation, Herwig Schuster.

He warned that excessive levels of mercury could be absorbed by fish and therefore enter the food chain.

If arsenic, in particular, were to get into the ground water and drinking water, “this might cause a serious problem for the region. Arsenic is very toxic and causes damage to the nervous system,” he said.

The pollution already wiped out all life in the smaller Marcal tributary and experts say it will take up to five years for that river to recover.

The wildlife protection group WWF warned of a “string of other disasters waiting to happen” all along the Danube basin.

Serbia, Croatia and Romania have said they were stepping up monitoring of the river given the risk of drinking water contamination in towns along the river.

Meanwhile in Slovakia, across the Danube from Hungary in the neighbourhood of the spill, authorities said they were not worried currently about contamination of their bank of the river.

“We are not worried for now. The Hungarian government has been taking steps and even if some pollution reached our territory, it would be diluted by the water,” Michal Stefanek, spokesman for Slovakia’s environmental inspection agency, told AFP.

Yes. My vote is with the government. There’s nothing to worry about here….