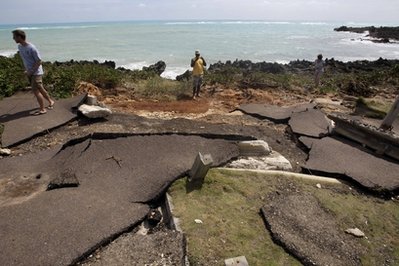 MIAMI (Reuters) – Hurricane Igor raced past the southeast tip of Newfoundland in Canada on Tuesday, buffeting offshore energy operations, while Tropical Storm Lisa ambled in the far eastern Atlantic after forming as the 12th named storm of the busy 2010 Atlantic season.

A hurricane watch was in effect for part of the coast of Newfoundland. Igor whipped up winds and waves and brought rain to the Grand Banks region, where offshore oil platforms are located. But it was not expected to cause damage to facilities designed to withstand extreme weather.

At the other end of the Atlantic, Lisa, carrying top sustained winds of 45 miles per hour, was moving slowly northwards about 530 miles west-northwest of the Cape Verde Islands and posed no immediate threat to land or energy assets.

Meteorologist Jeff Masters of private U.S. forecaster Weather Underground predicted in a blog posting that Lisa was not likely to intensify into a hurricane or threaten land.

Igor, which has been a large hurricane and over the weekend pounded Bermuda on its northwards path, was packing winds of 80 mph as it sprinted northeast at 46 mph, the U.S. National Hurricane Center said.

It said the passing storm produced hurricane-force wind gusts over parts of Newfoundland.

The center added that forecast models showed Igor gradually weakening as it follows a curving path that will take it northwestwards over open water between Greenland to the north and Newfoundland and Labrador.

Forecasters were also closely watching a tropical wave in the southeastern Caribbean that was producing showers and thunderstorms over much of the Windward Islands as it moved westward.

The U.S. hurricane center increased to 50 percent the chance of this system within 48 hours becoming a tropical depression — one step below tropical storm strength.

Weather Underground’s Masters called it “potentially dangerous” and said it could develop into a Caribbean tropical storm or hurricane late this week. But it was too early to say with certainty what its eventual path might be.

(Reporting by Pascal Fletcher; Editing by Will Dunham)