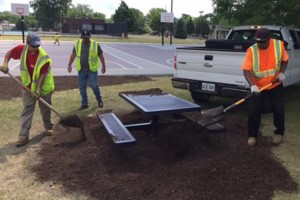 After decades of nearby industrial pollution, residents of the West Calumet Housing Complex in East Chicago, Indiana, were abruptly warned that they must vacate their homes for demolition given hazardous levels of lead and arsenic in the soil.

More than 1,000 residents of the 346-unit public housing complex were told last month by the city of East Chicago that they must find new housing, as the city planned to demolish all dwellings in the complex. Just days before, the city said residents would only have to temporarily relocate based on a US Environmental Protection Agency finding that soil around the complex contained toxic levels of lead and arsenic since at least 2014. Plans to remove the soil dated back to 2012.

“Somebody dropped the ball somewhere,” state Sen. Lonnie Randolph of East Chicago told the Associated Press of shock among residents as warnings of toxicity rapidly escalated. “Maybe it was intentional, or maybe by mistake. Maybe it was negligence.”

The housing complex, home to mostly African-American and Hispanic residents, is located near the former site of a plant that melted lead and copper, tossing toxic matter into the air throughout the area. The U.S. Smelter and Lead Refinery, Inc. plant was one of several industrial facilitates that likely contributed to the current contamination, AP reported.

The lead plant closed in 1985, yet the housing complex and nearby areas were not added to the EPA’s cleanup priority list until 2009. In 2012, the EPA had devised a plan to haul away much of the soil around the housing complex, but it was not until this May that the agency told the city that it wanted to begin digging. That notice triggered signs in the neighborhood warning residents to keep their children out of the soil.

The city’s two letters to residents — one calling for temporary relocation and the next from the mayor regarding complete demolition of the housing complex — sent panic through the neighborhood.

“I was like, ‘Wait a minute. What is he saying? How long have you known this?'” said Akeeshea Daniels, 40, a longtime housing complex resident and mother of three children who have had frequent, inexplicable ailments for years.

Read more
© Rebecca Cook Lead in Flint’s water now meets federal requirements – researchers
“They were doing testing all of these years and they never said anything. That was kind of shocking.”

No public agency, local or national, has been able to answer for the sudden, dire warnings that residents have received in recent months.

“When [Mayor Anthony Copeland] found out for the first time what the levels actually were he started asking very adamantly that the residents be immediately relocated,” city attorney Carla Morgan told AP.

East Chicago has promised housing vouchers to help pay for rent at new homes, but residents, all of whom are seeking housing all at once, have few attractive options.

“Everyone is afraid. A Pandora’s Box has been opened. Where are they moving us? Who is paying for it? Are my children safe?” Daniels said, according to Think Progress. “Why have they waited this long to tell us?”