Italy Earthquake Causes Apennine Mountains To Grow By Up To 4cm 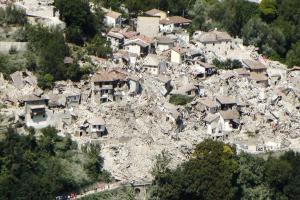 Italy’s devastating earthquake has caused the Apennine Mountains to grow by up to 4cm in parts, research has found.

The National Institute of Geophysics and Volcanology (INGV) said data from satellites and GPS stations show the range was permanently changed by the magnitude 6.2 quake because of movement along fault lines lying beneath.

It struck in the early hours of 24 August near the Apennine commune of Accumoli, razing entire towns to the ground and killing almost 300 people as they slept.

Seismologists said it was the result of tectonic faulting beneath the mountains, where the Adriatic plate is being forced beneath the Eurasian Plate.

“The earthquake caused a permanent deformation of the Earth’s crust,” INGV researchers said.

“It was generated by a fault line of over 18km, at an incline of around 50 degrees, which ran from north-northwest to south-southeast.

“The movement of this fault has caused an extension of the Apennine range of about 3-4 centimeters between the Tyrrhenian and Adriatic seas.”

The mountains stretch down the length of Italy, running into the Alps into the north and down to the coastal city of Reggio Calabria in the south.

The first earthquake struck at 3.36am near the town of Norcia in Umbria, with its shallow epicentre generating violent shaking that destroyed hundreds of homes.

It was followed by several significant aftershocks that worsened the devastation, leaving more than 2,500 people homeless.

Recovery work continues, with the body of an Afghan asylum seeker being pulled from the rubble in Amatrice on Monday.

The man, named as Sayed, had found work in northern Italy as a pizza chef but delayed his departure from the picturesque town to take part in its annual festival celebrating its signature “amatriciana” pasta sauce, the Corriere della Sera newspaper reported.

Amatrice was the worst hit by the disaster, which levelled many of its historic buildings to the ground.