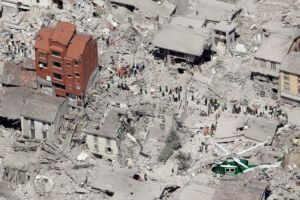 At least 120 people have been killed and 368 injured in an earthquake that hit a mountainous area of central Italy, PM Matteo Renzi has said.

The magnitude-6.2 quake struck at 03:36 (01:36 GMT), 100km (65 miles) north-east of Rome, not far from Perugia.
Many of the dead were in the historic town of Amatrice, where the mayor said three-quarters of the town was destroyed, and in nearby Accumoli.

Many people are still believed to be buried under rubble.

“This is not a final toll,” Mr Renzi warned as he gave the latest figures.
He had earlier paid tribute to the volunteers and civil defence officials who had rushed to the scene in the middle of the night and used their bare hands to dig for survivors.
He promised “no family, no city, no hamlet will be left behind”.

The tremor was felt across Italy, from Bologna in the north to Naples in the south. There have been dozens of aftershocks.
Hardest hit were the small towns and villages in the mountainous area where the regions of Umbria, Lazio and Le Marche meet.
Italy’s civil protection department said that at least 120 people were now known to have been killed.

In Amatrice at least 35 people have been killed, according to Italian news agency Ansa. Rescuers are trying to free a child trapped under the rubble there, and the missing include three nuns.

In Accumoli, 11 people are known to have been killed, including a mother, father and their two young sons. Mayor Stefano Petrucci told Ansa that not a house in the town was fit for habitation, and they would have to set up tents to house everyone.

In Arquata, a grandmother saved her two grandchildren, aged four and seven, by pulling them under a bed with her.

Italy’s National Institute of Geophysics and Volcanology said it had recorded more than 200 aftershocks by 15:00 (13:00 GMT) on Wednesday.
The country is no stranger to earthquakes: in 2009 a tremor killed more than 300 people in L’Aquila and in May 2012 two tremors nine days apart killed more than 20 people in the northern Emilia Romagna region.

Rescue teams from around the country have been sent to the affected region.
The area is mountainous and access is difficult. Tent camps are being set up for those who need shelter, while others will be accommodated in buildings such as gymnasiums.
Many of the people affected are on holiday.

The national blood donation service has appealed for donors to come forward.