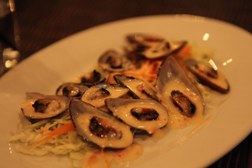 Authorities in Jakarta are no longer issuing permits to farmers to harvest green mussels because water pollution levels are so high.

At the same time, they are trying to encourage farmers to switch to catfish farming or move their operations to nearby Banten, an official said on Tuesday.

“The quality of the water in the Bay of Jakarta is no longer good for farming green mussels,” said Ipih Ruyani, the head of the Maritime Affairs and Fisheries Agency.

Ipih said green mussels were known for their capability to absorb heavy metal elements from the water around them and eat organic food residue.

“With the poor water quality, green mussels can help clean the water, but under one condition ­— that they are not consumed afterward,” Ipih said.

Ipih said that shellfish from heavily polluted waters retained dangerous and toxic metals that could cause cancer and organ dysfunction that could eventually lead to death.

“They can be dangerous if consumed regularly,” Ipih said.

The capabilities of mussels to absorb heavy metal, especially lead, cadmium and copper, have led them to be widely used in shrimp farms to keep the water clean, he said.

Ipih said that since 2010, the ministry had conducted an operation to convert 5,000 shellfish farmers on the coast into catfish farmers, or to have them move their operations to nearby Banten, where the water quality is better. Most of the farmers work out of the Muara Karang and Cilincing areas.

“In the past two years, we have been providing guidance to help green mussel farmers in the capital to convert into another business,” Ipih said.

The easiest option, he said, was for them to farm catfish.

He did not know how many had switched to farming catfish but said that they the agency was gathering information on those who had.

Ipih said his office was working with the Ministry of Maritime Affairs to provide financial assistance to the farmers but did not provide specifics.