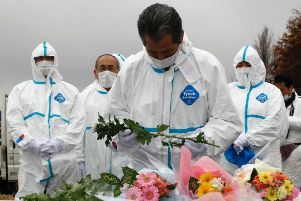 Millions of people around Japan have marked the first anniversary of the massive earthquake and tsunami which devastated dozens of communities and left 19,000 people dead.

Across the country, trains stopped, shoppers stood still and people fell silent at 2:46pm, marking the exact moment the earthquake struck, setting off a catastrophic chain of events.

Remembrance services have been held along the devastated coastline, while Japan’s emperor Akihito and prime minister Yoshihiko Noda attended the main memorial service in Tokyo.

Japan’s solemn national anthem rang out before the emperor and senior politicians stood in silence in memory of those who died.

A single pillar symbolising the souls of those who died stood in the middle of the stage, decorated with white chrysanthemums and lilies.

The emperor, who three weeks ago underwent heart bypass surgery, said Japan would never forget the tragedy and spoke of the importance of “kizuna”, or human bonds, in the wake of the disaster.

“Let us all as Japanese citizens think of the disaster-stricken areas and make efforts for the recovery and reconstruction and never forget the disaster that struck,” he said.

“Let us talk about this to future generations and progress to a safe and better future of Japan.”

“Our forebears, who led our country to prosperity, stood up with brave resolution in times of crisis,” he said.

“While offering our support for the daily struggles of those people in the disaster-affected regions, we will join hands as we seek to fulfil our historic mission of the rebirth of Japan through reconstruction.”

Dozens of communities hit by the terrifying tsunami also stopped to remember the dead and missing.

In hard-hit Ishinomaki, sirens wailed to mark the moment the huge quake hit, sending towering waves into the city where they claimed the lives of nearly 4,000 people.

“It’s been a year since my father died,” said Hitomi Oikawa, 37.

“I am going to pray that I can get over my grief and that my children can feel better.”

The tsunami also slammed into the Fukushima nuclear plant, helping to trigger meltdowns in three reactors.

In Okuma, home to the crippled plant, displaced residents wore anti-radiation suits, gloves and masks on a rare visit to their contaminated home town, where they remembered those they had lost.

An elderly woman, whose grandchild is still listed as missing, wept as she laid flowers at a makeshift alter.

“I want my grandchild to be found,” she said.

The government and plant operator Tokyo Electric Power (TEPCO) announced in December that “a state of cold shutdown” had been achieved for three runaway reactors that went into meltdown when their cooling systems were swamped by the tsunami.

But many parts of a 20-kilometre (12-mile) exclusion zone imposed around the Fukushima plant are likely to remain uninhabitable for years – perhaps decades.

At TEPCO’s Tokyo headquarters near the Imperial Palace, a small group of protesters unfurled banners on Sunday morning, demanding the shuttering of all nuclear plants in Japan.

On Sunday morning, Prime Minister Julia Gillard expressed condolences on behalf of all Australians to those who lost loved ones in the tragedy.