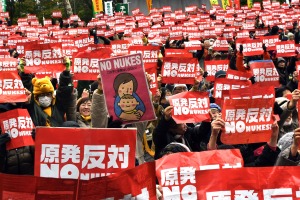 While Japan’s first nuclear power restart had to endure protests and even a volcano alert, the bond market is already pricing in more reactors resuming operations.

The cost to insure Kyushu Electric Power Co. debt against non payment fell to 39 basis points last week, the lowest since right after the March 2011 Fukushima meltdown, as its Sendai power station came back online. That for Kansai Electric Power Co. also slid to a four-year low. Twelve reactors will restart by March 31, 2017, out of Japan’s operable fleet of 43, the average of four analyst estimates compiled by Bloomberg shows.

Adding back nuclear energy should improve the finances of utilities since it has the lowest electricity generation cost of any power source, according to government data. Japan raised an eruption warning for a volcano on the southern island of Kyushu to the second-highest level on Aug. 15, four days after restarting the Sendai reactor 50 kilometres (31 miles) away.

“Reactor restarts will cut costs, such as those from purchasing liquid-natural gas, and increase profits,” said Mana Nakazora, the chief credit analyst in Tokyo at BNP Paribas SA. “Because of that, it will also tighten spreads.”

The bond risk of Kansai and Kyushu Electric has fallen below a gauge for Japanese companies. The Markit iTraxx Japan CDS index has dropped six basis points in the past year to 59, compared with a tumble of 48 in Kansai’s risk and a decrease of 26 for Kyushu, according to CMA data.

With the reactor online, Kyushu Electric’s profits are expected to increase by 7.5 billion yen ($61 million) a month, and that figure will double when it restarts a second reactor around the middle of October, according to Tokyo-based Kenji Kawabata, the company’s deputy regional director.

The company, based in Fukuoka in southern Japan, reported a net income of 18.8 billion yen for the three months ended June 30, compared with a 40.6 billion yen loss a year earlier.

Kyushu Electric’s probability of debt non-payment within one year has dropped to 0.29 percent from 0.9 percent 12 months earlier, according to the Bloomberg default-risk model, which considers factors such as share prices and debt levels. The gauge suggests the utility’s credit rating has risen to the second-lowest investment grade from a high-yield score.

Japan’s Nuclear Regulation Authority has said that five reactors, including two of Kyushu Electric at Sendai, meet its safety requirements. So far, 25 of Japan’s fleet of 43 reactors have applied to resume operations.

Now that Sendai’s back online, the pace at which the NRA approves reactors will be faster, according to Polina Diyachkina, an analyst who covers Japan’s power utilities at Macquarie Group Ltd.

“The framework for approval of new safety standard has been developed, the NRA knows which questions to ask and companies know how to answer them,” she said by e-mail.

Osaka-based Kansai Electric’s two reactors at the Takahama station, about 60 kilometres north of Kyoto, have received NRA approval, but court challenges have prevented them from restarting.

Once Kyushu Electric turns its second reactor at Sendai back on in October, the NRA will accelerate its review process for Kansai Electric’s Ohi units 3 and 4, Hidetoshi Shioda, an analyst at SMBC Nikko Securities Inc., wrote in a July 30 note. Legal issues at Takahama will also be resolved and its two reactors will be back online by the end of next year, he said.

In a Kyodo News poll this month, 55 percent of Japanese opposed restarting atomic plants while 37 percent were in favour.

In the long term, nuclear power output will probably taper. London-based Bloomberg New Energy Finance expects 15 gigawatts worth of nuclear power to be operating by 2030. This is below the government’s goal of more than 37 gigawatts.

Some reactors will retire in the mid-2020’s “because they will be hitting their lifetime limit” of 40 years without special permission, said Ali Izadi-Najafabadi, an analyst at Bloomberg New Energy Finance. “Our assumption is that only the larger reactors worth upgrading will get a 20-year extension.”