July Was The Hottest Month Ever 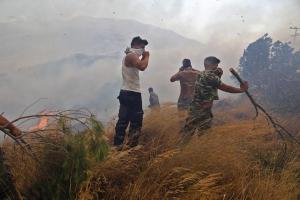 And it’s almost a dead certain lock that this year will beat last year as the warmest year on record, they said.

July’s average temperature was 61.86 degrees Fahrenheit, beating the previous global mark set in 1998 and 2010 by about one-seventh of a degree, according to figures released Thursday by the National Oceanic and Atmospheric Administration. That’s a large margin for weather records, with previous monthly heat records broken by a 20th of a degree or less.

“It just reaffirms what we already know: that the Earth is warming,” said NOAA climate scientist Jake Crouch. “The warming is accelerating and we’re really seeing it this year.”

NOAA records go back to 1880. Separate calculations by NASA and the Japanese weather agency also found July 2015 to be a record. (AP)