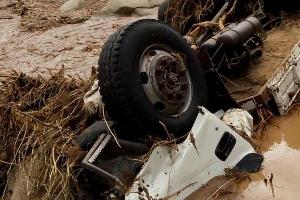 Seven people died after a bus they were travelling in was swept away by flash floods at Agolo Muok area on the Sori-Magunga road in Homa Bay County.

Six bodies have so far been recovered but an unknown number of people are still missing following the incident that occurred Friday.

The OCPD said rescuers saved 18 people among them three children as search for more bodies continues.

Chebaka said they are yet to establish the total number of the passengers who were on board saying that the bus’ carrying capacity should be 26.

Homa Bay County Police Commander John Omusanga said three bodies were recovered Friday night while the rest, among them that of a primary school teacher, were recovered Saturday morning.

He said that nine of those rescued were being treated at St. Camullus Hospital in Migori.

According to survivors Joseph Okwaro and John Odhiambo, the vehicle, which was heading to Gwasi from Sori, was carrying beyond the recommended capacity and was making its way through the flooded area when it was swept away.

The survivors said that all seats in the minibus were occupied and more than eighteen people were standing at the time of the accident saying that total occupancy was around 50 people.

He said the area has been adversely affected and they are now asking the county and national governments to move in with immediate effect and help mitigate the disaster.