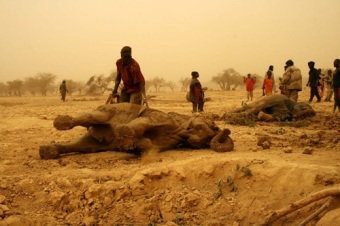 NAIROBI, Kenya — Poaching and drought-related hunger have killed more than 100 of Kenya’s famous elephants in the north of the country so far this year, conservationists say.

Zoologist Iain Douglas-Hamilton, who founded Save the Elephants, said the drought is Kenya’s worst in 12 years. The dry conditions pose a serious threat to the large and majestic animals, whose striking silhouettes across Kenya’s broad savannah draw around 1 million tourists each year.

“When (elephants) do not have enough food they also seem to be vulnerable to disease, their immune system weakens and they catch all sorts of diseases,” Douglas-Hamilton said Monday. “Elephants, particularly the young and the old, have begun to die.”

The body had previously banned such sales. Conservationists fear illegal ivory may find its way into those stockpiles.

Although Kenya was not included in the sale, Douglas-Hamilton said any ivory sales immediately push up global demand, since elephants could be killed in Kenya and their tusks smuggled into a foreign stockpile.

Around 23,000 elephants live in Kenya but populations can be devastated by poaching within a couple of years. A recent survey in Chad showed its elephant population had declined from 3,800 to just over 600 in the past three years.

“The drought is one of nature’s big events,” he said. “It hits all animals, elephants, people and others but the ivory trade is much more serious and could do much more damage if it remains unchecked.”