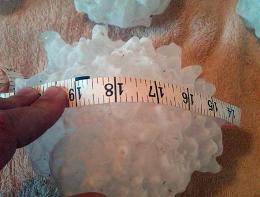 A hailstone weighing almost 2 pounds that fell on central South Dakota last Friday is the largest ever recovered in the USA, the National Weather Service announced.

The cantaloupe-size chunk of ice that landed in Vivian, S.D., measures 8 inches in diameter, 18.625 inches in circumference and weighs 1 pound, 15 ounces.

The man who collected it and other hailstones, ranch hand Leslie Scott, said even bigger specimens fell on the tiny farm town. “I just got lucky, I guess,” he told The Daily Republic.

He estimated that the hailstone was about 3 inches bigger originally but it “shrunk up a lot” in his freezer while the power was out for six hours.

The National Climate Extremes Committee of the National Oceanic and Atmospheric Administration certified that the Vivian hailstone eclipsed previous record-setters in Nebraska in 2003 and Kansas in 1970.

USA TODAY’s Jeff Martin writes that the hailstone is headed to a federal lab in Boulder, Colo., where scientists will study its growth rings and other traits to learn more about how hail forms. The world record is a 2.25-pounder that dropped on Bangladesh in 1986.

Dave Hintz, a meteorologist at the weather service in Aberdeen, S.D., first examined the big ice ball. He said two castings would be made — one for a local museum and one for Scott.

“It’s just amazing how much interest a piece of ice can generate,” Hintz told the Daily Republic. “Just amazing.