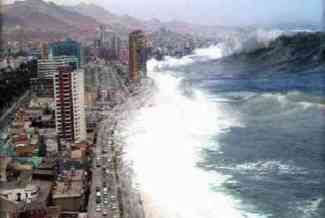 An unusual discovery about how earthquakes triggered tsunami waves in Haiti could mean that similar coastal cities, including Los Angeles, are at a higher risk from these deadly waves.

Geologists studying the magnitude-7 earthquake that struck Haiti on Jan. 12 say the risk of destructive tsunamis could be up to 10 percent higher than had been thought in places with similar coastal geology such as Kingston, Jamaica, Istanbul, Turkey, and Los Angeles.

Scientists have long known of the tsunami risk to Southern California. An underwater landslide just offshore, triggered by an earthquake, could create a tsunami that would slam into low-lying areas round Los Angeles within just one minute, researchers have said, adding that a worst-case scenario could cause $42 billion in damage.

Like Haiti’s capital, these cities all lie near the coast and near an active geologic feature called a strike-slip fault where two tectonic plates slide past each other like two hands rubbing together.

Strike-slip fault systems are not usually associated with tsunamis. Typically, a fault that moves up-and-down will move the seafloor and produce massive waves; strike-slip fault systems slide side-to-side when two plates butt heads. The Haiti quake, however, triggered massive underwater landslides that, along with a small amount of ground motion, made the waves, said Matt Hornbach, a study team member and a geophysicist at the University of Texas in Austin.

“As we look through the history books, people are starting to realize that slides play a bigger role,” Hornbach told OurAmazingPlanet.

Within minutes after the Haiti earthquake, a series of tsunami waves, some as high as 9 feet (3 meters), crashed into parts of the shoreline.

Haiti’s coastal setting, high sedimentation due to extreme wet and dry seasons dumping material down the mountains, and infrequent earthquakes that would release the coastal build-up of sediment are all causes of the slides. Geologists had previously estimated only about 3 percent of tsunamis globally are generated through submarine landslides. Combined with newly discovered evidence of historic tsunamis, the study revealed a third of all tsunamis near Haiti’s fault system are generated in this way.

“The scary part about that is you do not need a large earthquake to trigger a large tsunami,” Hornbach said. “Organizations that issue tsunami warnings usually look for large earthquakes on thrust faults. Now we see you don’t necessarily need those things. A moderate earthquake on a strike-slip fault can still be cause for alarm.”

Hornbach said that they can’t say for sure if this is a global phenomenon, but the discovery means that similar cities should reassess their readiness for an earthquake-induced tsunami.

“The geology of Kingston, Jamaica, is nearly identical to Port Au Prince, Haiti,” Hornbach said. “It’s primed and ready to go and they need to prepare for it. The good news is, they have a leg up because they’re aware of the problem.”