Mayon Volcano In The Philippines About To Erupt 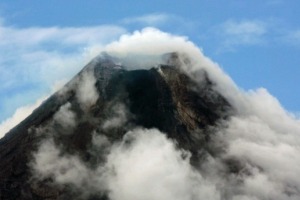 The Philippine Institute of Volcanology and Seismology has recorded a volcanic earthquake on the Mayon Volcano in southeastern Luzon, a day after warning locals to avoid areas close to the active dome due to “abnormal activity”.

The warning to the residents of Legazpi city of Albay province, located in the northern Philippines’ Luzon island, came after the volcano’s monitoring network detected an earthquake in the past 24 hours as well as the emission of white steam plumes and sulfur dioxide emissions indicating that magma is moving up from underneath the volcano.

“Phreatic explosion may happen anytime but a big explosion is expected in the coming days,” said PHILVOCS resident volcanologist Eduardo Laguerta, who noted that a similar “period of unrest” had occurred before a previous Mayon eruption.

The volcano’s last eruption in September 2014 forced more than 58,000 people to flee their homes.

Mayon is one of the most well known of the Philippines’ 18 active volcanoes.