Mega-Tsunami Wave Will Wipe Out New York and Miami at ANY TIME: 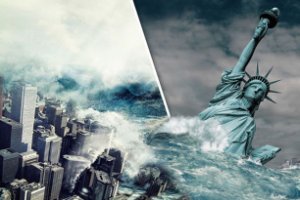 A DEVASTATING 150-foot tsunami could strike the east coast of America at any moment, a top scientist has warned.

New York, Boston and Miami could all be struck by the monster wave, while Central and South American tourist hotspots like the Bahamas, Barbados and Trinidad and Tobago would also in the firing line.

Dr Simon Day said a landslide in the Canary Islands could send the huge wave speeding thousands of miles across the Atlantic to the Americas.

The increasingly unstable Cumbre Vieja volcano could dump a chunk of land the size of the Isle of Man into the ocean, triggering a mega-tsunami with deadly consequences.

While it could send a 50 foot wave heading towards the UK and the south coast of Ireland, Dr Day said the real damage will be done in the densely-populated cities of the USA’s eastern seaboard.

He said: “A wave could curve towards Britain, depending on the power, but it will have the biggest impact on the Americas.”

Speaking 15 years after he first put forward his study, he admitted not everyone had reacted well to his prediction.

He said: “It’s [been] fifteen years of controversy.

“There was a series of objections. But independent modelling has shown the same things as me.

“My response is it’s better to know so we can prepare.”