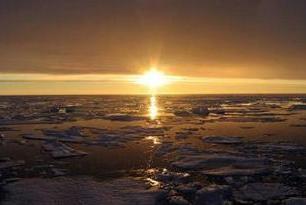 Between 2004 and 2009, the 30,000 snow-and-ice covered islands in the Canadian Archipelago shed 363 cubic kilometres (87 cubic miles) of water, equivalent to three-quarters of contents of Lake Erie, the study found.

Over the full six years, this added a total of one millimeter to the height of the worlds oceans, the researchers calculated.

“This is a region that we previously didn’t think was contributing to sea level rise,” said Alex Gardner, a researcher at the University of Michigan and lead author of the study.

“Now we realise that outside of Antarctica and Greenland, it was the largest contributor for the years 2007 through 2009. This area is highly sensitive and if temperatures continue to increase, we will see much more melting,” he said in a statement.

Ninety-nine percent of all the world’s land ice is trapped in the massive ice sheets of Antarctica and Greenland.

Despite their size, however, they currently only account for about half of the land-ice bleeding each year into the oceans, mainly because they are so thick and cold that ice melts only at their edges.

The other half of the ice melt contributing to sea-level rise comes from smaller mountain glaciers and ice caps such as those in the Canadian Arctic, Alaska and Patagonia.

The study’s results, published in Nature, show that the impact of these regions on sea level rise has been largely overlooked.

Gardner cautioned that the relatively short time span of the study — six years — is not long enough to constitute a climate trend, but said the results should be taken as a warning.

“This is a big response to a small change in climate,” he said. “If the warming continues and we start to see similar responses in other glaciated regions, I would say it’s worrisome.”

Most experts on climate change and sea levels project that the ocean watermark will rise roughly a metre by century’s end.

This could be devastating for tens of millions of people living in low-lying deltas, many of which are also sinking at the same time.