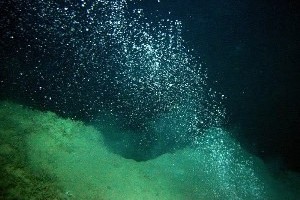 STOCKHOLM (AFP) – Methane, a potent greenhouse gas, is leaking from the permafrost under the Siberian seabed, a researcher on an international expedition in the region told Swedish daily Dagens Nyheter on Saturday.

“The permafrost now has small holes. We have found elevated levels of methane above the water surface and even more in the water just below.

It is obvious that the source is the seabed,” Oerjan Gustafsson, the Swedish leader of the International Siberian Shelf Study, told the newspaper.

The tests were carried out in the Laptev and east Siberian seas and used much more precise measuring equipment than previous studies, he said.

Scientists fear that global warming may cause Siberia’s permafrost to thaw and thereby release vast amounts of methane into the atmosphere. The effects of global warming are already most visible in the Arctic region.