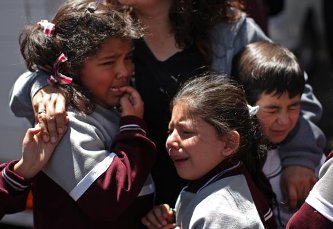 MEXICO CITY (AP) — A strong 7.4-magnitude earthquake hit central and southern Mexico on Tuesday, collapsing at least 60 homes near the epicenter and a pedestrian bridge in the capital where people fled shaking office buildings in fear.

One of the strongest to shake Mexico since the deadly 1985 temblor that killed thousands in Mexico City, Tuesday’s earthquake sent fear and panic across the region, especially after a less powerful, magnitude-5.1 aftershock was felt in the capital and several other aftershocks around the borders of Oaxaca and Guerrero near the epicenter.

But hours after the shaking at noon local time (18:06 GMT), there were still no reports of death or serious injury.

“It was very strong, very substantial,” said Campos Benitez, hospital director in Ometepec, about 15 miles (25 kilometers) from the epicenter.

Police radio operator Marcos Marroquin said there were preliminary reports of 60 houses damaged in the municipality but only a report of a broken arm. Guerrero Gov. Angel Aguirre, who is from Ometepec, was headed there to survey the damage.

In Mexico City, frightened workers and residents poured into the streets of the capital. Telephone service was down in the city and throughout the area where the quake was felt and some neighborhoods were without power, according to Mexico City Mayor Marcelo Ebrard, who set up a hotline for people to report damage.

About 40 passengers were stranded for a short time on the Mexico City airport air train, but later released. The airport closed for a time but officials said there was no runway damage and they resumed operations.

Samantha Rodriguez, a 37-year old environmental consultant, was evacuated from the 11th floor on the Angel Tower office building.

“I thought it was going to pass rapidly but the walls began to thunder and we decided to get out,” she said.

Tuesday’s quake was the strongest shaking felt in the capital since a magnitude-6.5 earthquake struck also in Guerrero in December. Officials said at least three people died in Guerrero, but there were no reports of widespread damage.

A magnitude-8.0 quake near Manzanillo on Mexico’s central Pacific coast killed 51 people in 1995 and a magintude-7.5 quake killed at least 20 people in the southern state of Oaxaca in 1999.

In Huajuapan, Guerrero, near the epicenter, hotel manager Marco Antonio Estrada also reported shaken-up guests but no major damage. He said it was longest and strongest he ever felt. People ran out of their homes and cars.

“It was very strong, but we didn’t see anything fall,” said Irma Ortiz, who runs a guesthouse in Oaxaca. She said their telephones are down, and that the quake shook them side-to-side.

The U.S. Geological Survey set the preliminary magnitude of the first quake at 7.4 and said the epicenter was 11 miles underground. The survey set the aftershock at 5.1.

U.S. President Barack Obama’s oldest daughter, Malia, was reported and safe while on vacation with a school group in Oaxaca.

Groups of women hugged and cried at Mexico City’s Angel of Independence monument, where hundreds of people evacuated from office buildings said they never had felt such a strong earthquake. Others typed ferociously on their Blackberries.

Mexico City’s airport was closed for a short time but there was no damage to runways and operations were returning to normal.

In Oaxaca, Sylvia Valencia was teaching Spanish to five adult students at the Vinigulaza language school when the earthquake hit.

“Some of us sat down, others ran out,” she said. “It was hard, it was strong and it was long.”

After the shaking stopped, however, she said they found no damage, not in their own classrooms, nor outside in the historical center of the city, so they went back to class.

Celia Galicia, who works at the U.S. consular office in Oaxaca, had just flown in from Mexico City when it hit.

She said there was panic in the airport, and a dash for the doors. But she said that she saw no damage at the airport and no one was hurt. She says one building in downtown Oaxaca appears to be damaged and has been evacuated.

She added that they’ve had two strong aftershocks, and that in downtown Oaxaca most people are out on the street at this point.

“It started shaking badly,” she said.