Mexico Set For Strongest Hurricane Ever. 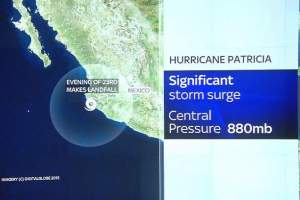 Locals and tourists are being evacuated inland or moved to emergency shelters as one of the most powerful storms ever recorded barrels towards Mexico with winds of over 200mph.

Waves of 40ft (12m) are predicted to lash the coastline and experts say Hurricane Patricia will be powerful enough to fling cars down the street.

The US National Hurricane Centre says it is the strongest storm ever recorded in the Western Hemisphere.

People on the country’s west coast are being warned of “catastrophic consequences” from the Category 5 storm.

Some 400,000 people are in the eye of the storm but there are not enough shelters for everyone to take refuge.

The storm is expected to hit just before midnight (GMT) and is stronger than Typhoon Haiyan which killed 6,000 people in the Philippines two years ago.

Tourists in Puerto Vallarta are either being evacuated or moved into special hurricane “safe rooms” in their hotels.

Loudspeakers along the resort’s shore have been warning people to leave.

Businesses around the nearby port of Manzanillo were also boarding and taping up windows.

British tourist Gordon Johnstone – in Puerto Vallarta – told Sky News he had been told the waves “could be as high as the third floor” and that they were being moved to a university.

“We’re not getting enough information on when exactly we’re going to be evacuated,” he said.

“There has been some buses moved and evacuated other people – some Mexicans and different people like that – but not any UK people.”

“They’ve handed out toilet paper and toiletries and pillows, so I wouldn’t expect it’s going to be that comfortable,” added Mr Johnstone.

Flights into and out of the region have been cancelled, leaving many with no option but to ride out the storm.

Another tourist, Mike Fogarty, said: “This one seemed to come out of nowhere … yesterday afternoon people were in the pool having a great time and it was like nothing was happening…

“Then the hotel passed notes under our doors – maybe about 9pm last night to let us know we may have to evacuate – it was pretty sudden.”

Hotel worker Gabriel Lopez, in Manzanillo, said tourists would be well looked after.

“If there is an emergency we will take care of the people. There are rooms that are not exposed to wind or glass.”

Sky News weather producer Joanna Robinson said the hurricane is “tied as the third strongest on the planet ever”.

She said it had a “central pressure of just 880mb and sustained wind speeds of 200mph – and gusts in excess of that”.

The storm is also set to have an impact on the US, with millions of Texas residents preparing for its remnants to reach the southern part of the state in a few days.