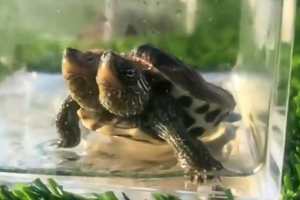 A strange turtle with two heads has shocked residents in south-east China.

The mutant turtle, said to be a red-eared slider, was born three months ago with the deformity and is currently living in captivity in Shangrao city in Jiangxi province.

Experts say the turtle cannot be released into the wild as it is unlikely to survive on its own and might pass on the rogue gene.

Footage filmed on Saturday shows the baby red-eared slider moving around normally in a plastic tank at a wildlife rescue shelter, with each flipper moving and all eyes blinking.

The species is native to the southern United States and northern Mexico and is commonly kept as pets in different parts of the world.

Jiang Jianping, a researcher at Chengdu Institute of Biology, Chinese Academy of Sciences, told Beijing News that the mutation was likely caused by a genetic abnormality or other environmental factors.

Editor’s Comment: This deformity may be caused by toxic metals as snakes lay their eggs in the ground just like the locusts of Revelation 9.