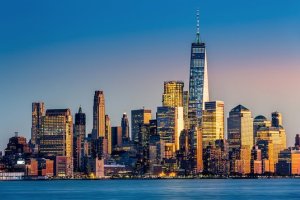 The sea level is rising, but it’s not rising evenly. Over the 20th century, the water lapping New York City climbed 1.5 times faster than the global average, according to a report published last year. That doesn’t make a whole lot of sense if you imagine sea levels rising like water in a tub. So Verge Science set out to discover what’s going on.

Big picture, this story is set against a backdrop of climbing global temperatures, which do a couple of things to the sea. Land ice melts and dribbles into the ocean, causing water levels to rise. Warmer waters also expand. “And that causes some amount of sea level rise as well,” says Andrea Dutton, associate professor of geology at the University of Florida.

Here’s the weird part: different parts of the ocean are at different heights. “It turns out that on the surface of the ocean today, the surface is not perfectly flat,” Dutton says. She told us there are hills and valleys wrinkling the ocean’s surface, currents that could pile water up against the East Coast of the US if freshwater from melting ice jams up the circulation, and land masses that are still settling back into place after a massive ice sheet began melting thousands of years ago.