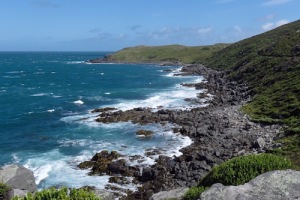 The central North Island was rocked by a 7.1 magnitude earthquake early this morning, located 130km north-east of Te Araroa.

A Tsunami warning was issued which has now been upgraded as small surges have been recorded.

8.30am: Civil Defence has cancelled the tsunami marine and beach threat warning in place for the North Coast regions of the North Island. It says the greatest tsunami activity has now passed but coasts may still experience unusual, strong currents and sea level fluctuations lasting for several more hours.

8.10am: A further “strong” 5.4 quake has struck 10km south of Te Araroa, on the East Cape. The quake, which struck at 8.05am, was at a depth of 42km, GeoNet reports. Dozens of smaller aftershocks have been recorded.

7.50am: Stock crashes off supermarket shelves at New World Whakatane.

7.45am: Britomart train station reopens. Newmarket station experiencing huge numbers of people as extra buses are put on to try to get the backlog of people into the CBD.

7.30am: Auckland’s Britomart station has been evacuated as a precautionary measure due to the tsunami warning. All trains to Britomart have been suspended with most terminating at Newmarket. Auckland Transport is organising more buses to pick people up and advice is to take alternative transport.

7.00am: Gisborne service station worker Melissa Down says petrol pumps were “swaying, bending and rolling”.Hicks Bay residents have been asked to move to higher ground.

6.55am: Jody Campbell of the Hicks Bay Motel and Lodge – which is on a cliff top overlooking the bay – says “everyone’s a bit shook up – including myself”. Jody, a Wisconsin native, told ONE News: “We’ve got the fire boss here, and we’re giving people coffee, there’s a pregnant woman here too”.

6.45am: Civil Defence has issued a tsunami warning for East Coast of the North Island (including Auckland, Waikato and Bay of Plenty). The warning has been lifted for the upper South Island. A tsunami was generated at East Cape with a wave measuring 30cm recorded.

6.30am recap: The quake struck at 4.37am off the East Cape and measured 7.1 on the Richter scale.
So far there have been no reports of damage or injury.
It was widely felt with people from Northland to Canterbury saying they felt it.
A potential tsunami warning has been issued which may be upgraded.
Civil Defence is still assessing the situation and in the meantime warns people living in coastal areas to be prepared and listen for updates.
The Tairawhiti Civil Defence emergency management centre has been activated.

6.25am: Sheridan Gundry from Tairawhiti Civil Defence told Breakfast there have been no reports of damage of injury although there were some brief power outages.