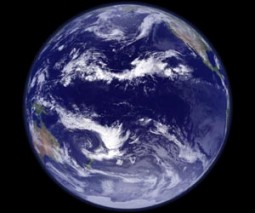 Changes in the ratio of nitrate to phosphorus in the oceans off the coasts of Korea and Japan caused by atmospheric and riverine pollutants may influence the makeup of marine plants and influence marine ecology, according to researchers from Korea and the U. S.

“Normally in a marine environment nitrate is the limiting factor, but increased nitrate in the ocean can spur growth and create a situation where phosphorus becomes the nutrient in short supply,” says Raymond G. Najjar, professor of oceanography, Penn State. “This change in nutrients could favor organisms that are better suited for high nitrate and low phosphorus.”

According to the researchers, the effects of anthropogenic nitrate pollution from the air have been shown to be significant in local lakes, streams and estuaries in Norway, Sweden and the U.S.

“This is the first evidence of increases in nitrate in ocean waters not in an enclosed estuary like the Chesapeake Bay,” said Najjar. “These are large, very deep bodies of water and it is surprising to see increased nitrate in these large seas.”

They also compared the amount of nitrogen deposited from the air between 2002 and 2008 for Korea and Japan with the amounts of nitrate in the water during that same time period to show that the increased levels in the water are directly correlated to an increase in human-generated atmospheric nitrogen.

The area studied included the Yellow Sea, the Sea of Japan and the East China Sea. The researchers found that the phosphorus levels in the ocean water remained the same through time.

“The abundance of nitrogen relative to phosphorus in northeastern Asian marginal seas has increased significantly since 1980,” the researchers report in the online edition of Science Express. “Anthropogenic atmospheric nitrogen deposition has narrowed the deficiency of nitrogen relative to phosphorus across the study area and has even resulted in a nitrogen surplus in the East China Sea, Yellow Sea and East Sea, commencing in the mid-1990s.”

The other source of nitrate into the oceans is from runoff from industry and agriculture that reaches the seas via rivers. In most cases, this nitrogen is quickly diluted.

“In areas located downstream of the Changjian River plume, contributions from both anthropogenic atmospheric nitrogen and riverine nitrogen fluxes appeared to be of equal importance in governing trends in seawater nitrate,” the researchers report.

The researchers also looked at the area in the North Pacific on the south and east of Japan, but while nitrate in these waters did increase slightly, the increase was not significant except close to the Japanese coast. The highest level of increase seen was in the Yellow Sea east of China, where the Changjian River enters the sea. Other areas of significantly increased nitrates include the area east of the Korean peninsula and an area in the north of Japan south of Sapporo.

The researchers suggest that their results have broader applicability. “The observed trends may be extrapolated to the coastal seas of the North American Atlantic Ocean and the North, Baltic and Mediterranean Seas, which have received ever-increasing amounts of anthropogenic atmospheric nitrate deposition and river-borne nitrate, comparable to those absorbed by coastal and marginal seas of the northwestern Pacific Ocean.”