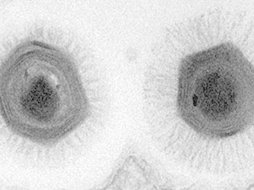 A virus found in the sea off the coast of Chile is the biggest in the world, harbouring more than 1,000 genes, surprised scientists say.

The genome of Megavirus chilensis contains almost 1.26 million base pairs, making it the most complex DNA virus ever described and 6.5 per cent bigger than the previous record-holder Mimivirus, which was isolated in 2003.

The virus was collected from sea water sampled close to a research station in Las Cruces, Chile.

Viruses differ from bacteria in that they are usually far smaller and cannot reproduce on their own, needing to penetrate a host cell in which to replicate.

Those such as Mimivirus infect single-celled organisms known as acanthamoeba, but the researchers are not certain whether this is the case for Megavirus chilensis.

Although it can be seen through a normal microscope, Professor Jean-Michel Claverie of Aix-Marseille University in France and colleagues used an electron microscope to accurately image and measure the virus.

They calculated that the soccer ball-shaped virus is 680 nanometres in diameter, larger than most bacteria. It is also covered by a layer of fibres, with one or two thicker regions labelled as cowlicks.

At this stage, the researchers are not sure how the virus became so large.

One hypothesis suggests that over time it pick-pocketed DNA from previous hosts – a process known as host gene transfer.

The other theory points to Megavirus chilensis and Mimivirus originating from an even more complex viral ancestor, “itself eventually derived from an ancestral cellular genome”.

The virus is described in this week’s edition of the journal Proceedings of the National Academy of Sciences.