Oceans Set To Rise By 1.6 Metres 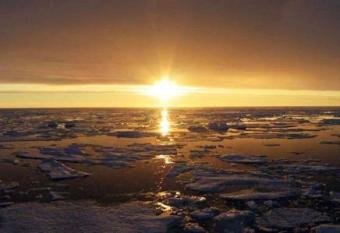 Warming in the Arctic occurring at twice the global average is on track to lift sea levels by up to 1.6 metres (5.3 feet) by 2100, a far steeper jump than predicted a few years ago, a consortium of scientists reported Tuesday.

Melting ice and snow has accounted for 40 percent of recent increases in ocean levels and are likely to play an even larger role in future, according to the Oslo-based Arctic Monitoring and Assessment Project (AMAP).

“Global sea level is projected to rise 0.9 to 1.6 metres (3.0 to 5.3 feet) by 2100, and the loss from Arctic glaciers, ice caps and the Greenland Ice Sheet will make a substantial contribution to this,” AMAP said in a report.

Even the low end of this range would have devastating consequences for coastal cities and densely-populated, low-lying deltas in Bangladesh, Vietnam, China and many other countries, scientists have warned.

Higher seas would literally cover some small island nations, ruin vast expanses of land used to grow food, and boost the intensity of deadly hurricanes and other extreme weather events.

In early 2007, the UN’s Intergovernmental Panel on Climate Change (IPCC) said the world’s oceans would creep up 18 to 59 centimetres (7 to 23 inches) by century’s end.

But the panel’s landmark report did not include the potential impact of melting ice, especially from the massive Greenland Ice Sheet, which alone holds enough frozen water to push up sea levels by at least five metres (16 feet).

The new study shows that the past six years have been the warmest period ever recorded for the Arctic, and that summer temperatures were higher in the past few decades than at any time in the last 2,000 years.

“The changes that are emerging in the Arctic are very strong, dramatic even,” said Mark Serreze, director of the U.S. National Snow and Ice Data Center in Boulder, Colorado, and a contributor to the report.

“But this is not entirely a surprise. We have known for decades that, as climate change takes hold, it is the Arctic where you are going to see it first, and where it is going to be pronounced,” he said by phone.

The report forecasts that the Arctic Ocean, within three or four decades, will likely become nearly ice free during the summer months.

Three of the last four years have seen polar sea ice shrinking to its smallest area since satellite images became available, with a record low in 2007 of 4.13 million square kilometres (1.56 million square miles).

The report also highlights new evidence that changes in Arctic snow and ice conditions may actually be accelerating the warming process.

“The fact that highly reflective snow and ice surfaces are diminishing means that darker land or ocean surfaces are absorbing more of the sun’s energy, warming the Earth’s surface and the air above,” the researchers said.

Rather than being bounced back into space by white surfaces, in other words, the sun’s heat is trapped inside the atmosphere.

The study identified eight of these so-called natural “feedback mechanisms” that have become both symptom and cause of climate change.

Rising average temperatures, for example, threaten to unlock long-frozen stores of carbon dioxide and methane — at least 20 times as potent a greenhouse gas as CO2 — from the region’s permafrost.

“The amount of carbon that is locked up in permafrost is equivalent to what is in the atmosphere today,” said Serreze. “The question is how much of it is going be released.”

Drawing from the research of several hundred climate scientists and glaciologists, the report comes ahead of a May 12 meeting in Greenland of foreign ministers from Arctic Council nations: Canada, Denmark, Finland, Iceland, Norway, Russia, Sweden and the United States.

Founded in 1991, AMAP is now a working group of the Council.