One Dead In South Carolina Floods 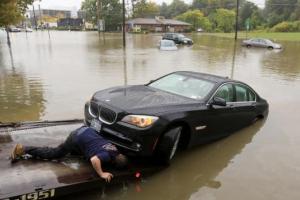 Parts of South Carolina have seen 5 or more inches of rain fall in a drenching storm that flooded and closed roads, submerged cars and made for a hazardous commute.

Officials in Spartanburg County say one person died Thursday morning in the street flooding. Another person who was able to get out as his vehicle was swept off the road managed to cling to a tree and was rescued.

The flooding was mostly localized. Areas only 15 miles away from the worst got just drizzle.

Twenty-nine-year old Jess Herzog takes back roads to her job at a public library, and she says rain has made driving treacherous, especially coming home from work late last night.

In an email, she wrote, “There have been some downed trees where I live, and the rain’s definitely hampered things.”

She wrote that the nearby Pacolet River has previously overflowed its banks and she fears it might happen again. She says, “I take that bridge twice a day to get to and from work!”

She also fears a repeat of 2005, when Hurricane Rita caused problems in the area. Hurricane Joaquin is churning in the Atlantic and threatening the U.S.