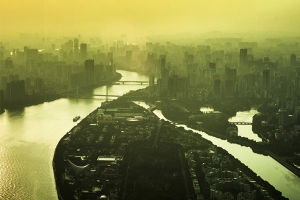 Environmental authorities in South China’s Guangdong Province have questioned a Canadian scholar’s claim that arsenic levels in groundwater in some parts of the Pearl River Delta are 15 times higher than the international standard, while experts affirmed the situation is severe.

John Cherry, a Canadian hydro-geologist, told Hong Kong-based Oriental Daily on August 4 that groundwater in most rural areas in the Chinese mainland has been contaminated, with 80 percent of water sources in some areas unsafe for human use.

Cherry noted that samples collected by his research team in 2012 found that arsenic levels in groundwater in the Pearl River Delta were 15 times higher than the World Health Organization’s standard and would harm human health if used as drinking water or in irrigation.

Cherry explained that China’s cities utilize deeper groundwater sources that might not be polluted, while people in rural areas draw water from shallower reserves, which can easily be tested for arsenic and other chemicals with unknown sources.

An official surnamed Li from the Department of Environmental Protection of Guangdong Province told the Global Times on Monday that the bureau disagrees with the statistics on pollution given by Cherry, but he refused to comment further.

Ma Jun, director of Beijing-based nonprofit organization the Institute of Public and Environmental Affairs, told the Global Times that since the statistics on groundwater pollution available from authorities are limited, the public may be stunned by the severe water quality situation revealed by other organizations.

Ren Tianzhi, head of the Agro-Environmental Protection Institute at the Ministry of Agriculture, argued with Cherry’s data, saying the research’s samplings failed to provide an overall evaluation of groundwater pollution in China.

The Ministry of Water Resources released a report on its official website in January saying that more than 47.3 percent of the groundwater many Chinese farms, factories and rural households draw from shallow wells is unsafe for human use of any kind due to pollution. An additional 32.9 percent was only safe for industrial or agricultural use, the report found.

Ye Kuangzheng, a commentator on social issues, in June called for strict laws and the enforcement of bans on enterprises’ discharge of industrial wastewater underground, sohu.com reported.