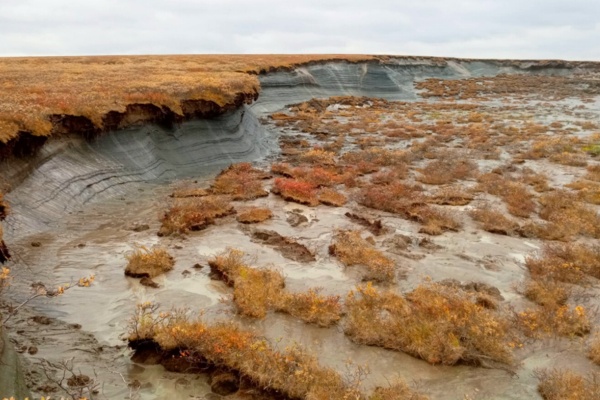 Simulations by global climate models show that when sea ice is in rapid decline, the rate of predicted Arctic warming over land can more than triple. The image at left shows simulated autumn temperature trends during periods of rapid sea-ice loss, which can last for 5 to 10 years.

The accelerated warming signal (ranging from red to dark red) reaches nearly 1,000 miles inland. In contrast, the image at right shows the comparatively milder but still substantial warming rates associated with rising amounts of greenhouse gas in the atmosphere and moderate sea-ice retreat that is expected during the 21st century.

Most other parts of the globe (in white) still experience warming, but at a lower rate of less than 1 degree Fahrenheit (0.5 Celsius) per decade.
The rate of climate warming over northern Alaska, Canada, and Russia could more than triple during periods of rapid sea ice loss, according to a new study. The findings raise concerns about the thawing of permafrost, or permanently frozen soil, and the potential consequences for sensitive ecosystems, human infrastructure, and the release of additional greenhouse gases. (Methane)

“Our study suggests that, if sea-ice continues to contract rapidly over the next several years, Arctic land warming and permafrost thaw are likely to accelerate,” says lead author David Lawrence of the National Center for Atmospheric Research (NCAR).

The study will be published Friday, 13 June, in Geophysical Research Letters, a journal of the American Geophysical Union (AGU).

The research, conducted by scientists from NCAR and the National Snow and Ice Data Center (NSIDC), was spurred in part by events last summer, when the extent of Arctic sea ice shrank to more than 30 percent below average, setting a modern-day record.

From August to October last year, air temperatures over land in the western Arctic were also unusually warm, reaching more than 2 degrees Celsius (4 degrees Fahrenheit) above the 1978-2006 average and raising the question of whether or not the unusually low sea-ice extent and warm land temperatures were related.

To investigate this question, Lawrence and his colleagues analyzed climate change simulations generated by the NCAR-based Community Climate System Model.

Previous analysis of these simulations suggested that a sustained period of rapid ice loss lasting roughly 5 to 10 years can occur when the ice thins enough. During such an event, the model revealed, the minimum sea-ice extent can drop by an area greater than the size of Alaska and Colorado combined.

The team finds that, during episodes of rapid sea-ice loss, the rate of Arctic land warming is 3.5 times greater than the average 21st century warming rates predicted in global climate models. While this warming is largest over the ocean, the simulations suggest that it can penetrate as far as 1500 kilometers (about 900 miles) inland.

The simulations also indicate that the warming acceleration during such events is especially pronounced in autumn. The decade during which a rapid sea-ice loss event occurs could see autumn temperatures warm by as much as 5 degrees C (9 degrees F) along the Arctic coasts of Russia, Alaska, and Canada.

Lawrence and his colleagues then used the model to study the influence of accelerated warming on permafrost and found that in areas where permafrost is already at risk, such as central Alaska, a period of abrupt sea-ice loss could lead to rapid soil thaw.
This situation, when summer thaw extends more deeply than the next winter’s freeze, can lead to a talik, which is a layer of permanently unfrozen soil sandwiched between the seasonally frozen layer above and the perennially frozen layer below. A talik allows heat to build more quickly in the soil, hastening the long-term thaw of permafrost.

Arctic soils are believed to hold 30 percent or more of all the carbon stored in soils worldwide. Although researchers are uncertain what will happen to this carbon as soils warm and permafrost thaws, one possibility is that the thaw will initiate significant additional emissions of carbon dioxide or the more potent greenhouse gas, methane.

About a quarter of the Northern Hemisphere’s land contains permafrost, defined as soil that remains below 0 degrees C (32 degrees F) for at least two years. Recent warming has degraded large sections of permafrost, with pockets of soil collapsing as the ice within it melts. The results include buckled highways, destabilized houses, and “drunken forests” of trees that lean at wild angles.

“An important unresolved question is how the delicate balance of life in the Arctic will respond to such a rapid warming,” Lawrence says. “Will we see, for example, accelerated coastal erosion, or increased methane emissions, or faster shrub encroachment into tundra regions if sea ice continues to retreat rapidly?”

The study sheds light on how interconnected the Arctic system is, says NSIDC co-author Andrew Slater. “The loss of sea ice can trigger widespread changes that would be felt across the region.”

The study was funded by the U.S. Department of Energy and by the National Science Foundation, NCAR’s sponsor.

Editor’s Comment This provides the fuel for the burning hail in Revelation.