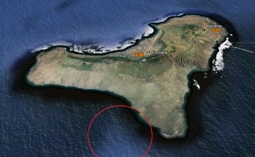 The Instituto Geografico Nacional (IGN) has reported surface deformations exceeding 35mm on the Spanish island of El Hierro, where residents have been alert for a possible volcanic eruption.

The number of earthquakes recorded since July 17 on the smallest of The Canary Islands exceeded 9250 on Tuesday morning.

IGN confirmed on Monday that 1172 earthquakes were recorded last week, the majority of which were located in the sea to the SW of the 280-sqkm island.

52 of the earthquakes were felt by the local population, estimated to be approximately 10,000. A further 10 earthquakes, exceeding 3.0 magnitude on the Richter Scale, were felt during Monday and early on Tuesday.

Hierro, a shield volcano, has had a single historic eruption from the Volcan de Lomo Negro vent in 1793. The eruption lasted approximately one month and produced lava flows.

The recent surge in the number and intensity of earthquakes prompted officials from the IGN and The Canary Islands Government to raise the alert level for the Hierro volcano to ‘Yellow’ late last month.

Magma Movement
Seismologists say the majority of the earthquake activity has shifted from El Golfo in the island’s northwest to beneath the Las Calmas Sea in the south.

However, magma is now on the move upwards while the depth of earthquakes has become increasingly shallow in recent days with most being recorded at a depth of 10 to 14 kilometres. Movement of magma towards the surface signifies that a volcanic eruption is likely to happen, but the timing of such remains unclear.

Volcanologist Juan Carlos Carracedo last week suggested that an eruption on El Hierro would “not be a major surprise”. He explained: “It is the youngest of the Canary Islands. There is a ball of magma which is rising to the surface and it is stationed at the limit of the earth’s crust. At the moment we do not know if that ball of magna will break the crust and cause an eruption.”

IGN Director, María José Blanco said that any eruption on El Hierro would most likely have a “low explosion value”.

The Spanish Civil Guard (Guardia Civil) advised almost 50 residents of the municipality of La Frontera to leave their homes because of landslide fears. Two units of the Spanish military’s emergency intervention unit (EMU) were also placed on standby to depart the nearby island of Tenerife to assist in the possible evacuation of hundreds of other El Hierro residents.

Meanwhile, the island’s main tunnel (Tunel del Golfo), which links Frontera to Valverde, was shut forcing motorists to travel across the 280-sq-km island via a mountain road. The Cabildo de El Hierro also ordered the closure of schools on Wednesday.