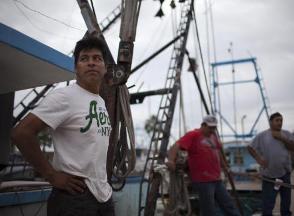 PORT LAVACA, Texas – In better days, the loading dock in this East Texas harbor city would be a bustle of activity: fishermen unloading sacks filled with fresh oysters, dealers paying by the sack for the bivalves, 18-wheelers hauling them to Florida, Virginia and other destinations.

On an afternoon last month, the dock was quiet. A handful of fishermen lingered by their boats, swapping rumors and lamenting the fate of their industry.

“We’ve never seen anything like this before,” oysterman David DeLeon says. “It’s never been this bad.”

A monstrous bloom of toxic algae looming across the Texas coast has shut down oyster season. Fueled by Texas’ ongoing drought, the algae — known as Karenia brevis— thrives in warm, salty water and has spread through the bays and islands along Texas’ 350-mile coast, says Meridith Byrd, a marine biologist for the Texas Parks and Wildlife Department. The algae could cause nausea, vomiting and diarrhea in humans and is harmful to fish but not fatal to people, she says.

State health officials took the rare step of closing the entire coast for oyster harvesting — all 17,586 acres of oyster beds — before the season opened Nov. 1. The state has shut down the entire coast before, most recently in 2000, according to state health officials. But the size of the current bloom coupled with the state’s ongoing drought and lack of rain could make it one of the biggest and most destructive in history, Byrd says. The bloom so far has killed 4.5 million fish, she says.

The $30 million Texas oyster industry, having already endured destruction from Hurricane Ike in 2008, fallout from last year’s BP oil spill and the ongoing statewide drought, today faces one of its toughest challenges, says Sammy Ray, a shellfish toxicologist for Texas A&M University-Galveston who has studied oysters for more than 60 years.

Oysters live in a delicate balance of saltwater and freshwater. Too much freshwater kills off oysters by the bushel, while water with too much salt spawns diseases such as the current red tide, he says.

The “red tide” algae usually live deep offshore and are kept away from inland waters by freshwater river runoff and rainstorms, Ray says. With lack of freshwater because of the drought, the red tide has crept dangerously close to shore.

Even more lethal than the red tide is a parasite known as “dermo” that is spreading through Texas coastal waters with alarming speed, Ray says. The parasite is also spawned by the warm, salty water conditions caused by the drought. Though not harmful to humans, it’s fatal to oysters, he says.

“It’s the most I’ve ever seen of it and in areas I’ve never seen it in before,” Ray says. “Nothing’s going to stop it until we have a big flood.”

The closures are devastating the industry.

These days, it’s down to four or five, with most of the oysters coming from Louisiana, she says.

The company lost oyster beds and equipment during Ike and saw its oyster shipments drop significantly when Louisiana’s oyster grounds closed amid last year’s oil spill in the Gulf, she says. But the long-term closure of Texas’ coast could be the most serious blow to the industry, she says.

“Between hurricanes, oil spills and now the red tide, the oysters have been beaten up pretty bad,” Halili says. “There’s not going to be anything left alive out there.”

In Port Lavaca, the impacts are felt throughout the coastal city — from fueling stations to equipment suppliers and the bars and restaurants that fishermen frequent, says Curtis Miller, owner of Miller Seafood Co., which processes and ships oysters. The business, started by his uncle 37 years ago, is down 80% since the closures, as are others across town, he says.

“People are really suffering,” Miller says. “They don’t know where their next meal is coming from.”

At the Ed Melcher Hardware store on Main Street, the gloves, ropes, rubber boots and oyster hatchets that usually fly off the shelves this time of year gather dust in the front display.

The closures are costing the store $4,000 a month, owner J.C. Melcher says. During oyster season from November through April, oyster fishermen account for about one-fourth of store revenue, he says.

Fisherman Mauricio Blanco, 39, spent $8,000 on improvements to his boat in the off-season. Now he’s scrambling to find a way to support his wife and five children. He has cut back expenses, including holiday shopping, until it looks like the grounds may reopen.

“It’s going to be a miserable Christmas,” Blanco says.