Riots in Algeria Over Food Prices 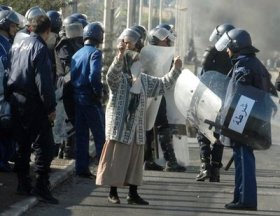 Police helicopters circled over Algiers, and stores closed early. Security officers blocked off streets in the tense working-class neighborhood of Bab el-Oued, near the capital’s ancient Casbah, and areas outside the city were swept up in the rampages.

The U.S. Embassy issued a warning to Americans in Algeria to “remain vigilant” and avoid crowds.

Riots on Wednesday night in the neighborhood saw a police station, a Renault car dealership and other buildings set ablaze. Police with tear gas fired back at stone-throwing youths through the night.

Wednesday’s violence started after evening Muslim prayers. It came after price hikes for milk, sugar and flour in recent days, and amid simmering frustration that Algeria’s abundant gas-and-oil resources have not translated into broader prosperity.

Violence erupted across town in the El Harrach neighborhood, where youths set tires on fire and threw stones at police. Some officers were seen rounding up suspected troublemakers.

The violence led to blocked roads and kept schoolchildren and workers from getting home. Parents were heard talking to their children on cell phones, urging them to seek safety.

Algeria is still recovering from an insurgency that ravaged the country throughout the 1990s after the army canceled 1992 elections that fundamentalists were expected to win. Bab el-Oued is a former stronghold of that group, the now-banned Islamic Salvation Front, or FIS.

“They are right, these young people. They have no job, no housing, no visa (for other countries) and now not even bread or milk,” said Amara Ourab, a resident of the neighborhood in her 50s.

The unrest in Tunisia began when a young man set himself on fire Dec. 17 in the Sidi Bouzid region after police confiscated the fruits and vegetables he sold without a permit. The man had a university degree but no steady work, and his hardship resonated with many in Tunisia, where unemployment stands at 14 percent but is much higher outside the capital.

On Thursday, lawyers across the country staged a strike to protest the violence some members of the national bar faced at a support rally for the residents of Sidi Bouzid last Friday.

Ahmed Seddik, a lawyer involved in the strike, said 95 percent of members in a labor council representing the lawyers had taken part in the peaceful strike and accompanying protest in Tunis.

Separately, about 40 police surrounded the home of a well-known Tunisian rapper, Hamada Ben Amor, and arrested him along with a blogger after Amor’s Facebook site featured two songs critical of the government, the singer’s brother said.

Ben Amor, 22, was arrested before daybreak at his home in the town of Sfax in southern Tunisia, said the brother, Hamdi Ben Amor.