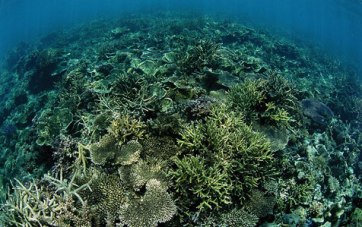 Bunaken Island: Rising water temperatures, sea levels and acidity are threatening to destroy the vast region of southeast Asia known as the Coral Triangle, also called the ocean’s answer to the Amazon rainforest.

What happens if there’s no more “shell” in shellfish?

A new documentary on Discovery’s Planet Green network, Acid Test: The Global Challenge of Ocean Acidification (premiering Wednesday, 10:30 p.m. ET/PT, and repeating throughout the month), explores this and other questions related to ocean acidification, a little-known but potentially disastrous consequence of global warming.

Known by some scientists as “the other carbon problem,” the increased amounts of atmospheric carbon dioxide (caused by the burning of fossil fuels) also have been absorbed into the world’s oceans during the past 200 years, the documentary says. The oceans cover 70% of the planet’s surface.

The additional carbon not only warms the oceans, but it’s also radically transforming their chemistry, says Lisa Suatoni of the Natural Resources Defense Council, which produced the film. As the carbon reacts with the seawater, it’s rapidly making the water more acidic.
How rapidly? “Ocean acidity has increased by 30% since the Industrial Revolution,” Suatoni says. She says oceanic carbon dioxide may double again by the end of the century.

“This may challenge life on a scale that hasn’t happened for tens of millions of years,” narrator Sigourney Weaver says in the film.
The increased acidity corrodes seashells, and thousands of species build shells around them to live. “It removes the building block for producing shells,” says Steve Palumbi of Stanford University. “A lot of organisms may not be able to survive.”

But is the fear of ocean acidification overblown? Perhaps, say the authors of a study published in May in the academic journal Proceedings of the National Academy of Sciences.
The authors of the study, led by Rebecca Gooding of the University of British Columbia in Vancouver, dispute the belief that ocean acidification harms all marine life forms and urged that caution should be taken when examining “overgeneralized predictions.”

In addition to a battery of top ocean acidification scientists, including leading expert Ken Caldiera of the Carnegie Institution for Science, Acid Test infuses some regular-guy perspective from commercial fisherman Bruce Steele. He warns that ocean acidity puts many prime shellfish species at risk — such as oysters, lobsters and Dungeness crabs — all of which he and his fellow shellfishermen depend on for their livelihood.
“Either we change what we’re doing on land or it will have profound effects on fisheries as we know it,” he says.
The film also touches on the threats to the world’s coral reefs, which can be damaged by ocean acidification as well as rising water temperatures.