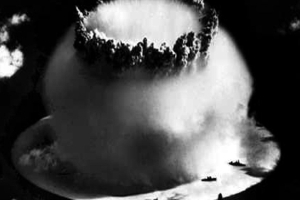 Nearly 70 years after they were uprooted to make way for United States nuclear weapons testing, Bikini Islanders are now reeling from rising seas and have asked Washington to aid a new resettlement.

For decades, Bikini islanders have struggled to survive on Kili, an inhospitable and isolated island with no lagoon for fishing or calm anchorage for boats. Repeated ocean water flooding over the past four years and a runway that turns to mud when it rains pushed the Bikini Council on Thursday to request US government assistance to relocate a population that has lived in exile since the start of nuclear testing at Bikini in 1946.

The United States tested 24 nuclear weapons at Bikini, including its largest hydrogen bomb, Bravo, at 15 megatons in 1954. Early in the testing, radioactive contamination of all the target ships created the first case of immediate, concentrated radioactive fallout from a nuclear explosion.

Bikinians have suffered from health impacts of the testing for decades and a struggle continues to get adequate compensation from the US and full disclosure about its testing programme. The Bikini people now also hope for American help to overcome the upheaval they increasingly face from the change in sea levels.

Bikini people faced with no choice but to leave

The Bikini Council has approved two resolutions, requesting US Interior Department assistance to gain Congressional amendments to allow the Resettlement Trust Fund for the People of Bikini, established in 1982 by US public law, to be used for relocation outside of the Marshall Islands.

“In the future, we may have no option but to relocate,” said Bikini Mayor Nishma Jamore, explaining why the Council adopted the resolutions following public hearings in Majuro and Ejit, and a council meeting on Kili.

“We are preparing for the future. Climate change is real. We are feeling and experiencing it. In the future we will have no choice but to relocate.”

Resolution 46 noted that since their resettlement to Kili in 1948, the change from an atoll environment to a single island with no lagoon “continues to take a severe psychological toll on the people.”