Russia To Compensate Over Greenpeace Snatch 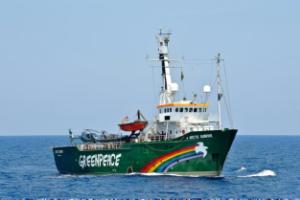 Russia must compensate the Netherlands over the 2013 seizure of Greenpeace’s Arctic Sunrise ship during a protest against Arctic oil drilling, an international court ruled on Monday.

The Permanent Court of Arbitration (PCA) “found that the Netherlands is entitled to compensation with interest for material damage to the Arctic Sunrise” and those who were onboard, the Hague-based body said in a statement.

Russian commandoes seized the Dutch-flagged ship in September 2013 and detained the 30 Greenpeace activists and journalists onboard after a protest at an offshore oil rig owned by Russian state oil giant Gazprom.

Moscow’s angry response to the protest, during which two Greenpeace activists had tried to scale the drilling platform, sparked an international outcry.

The activists — who became known as the “Arctic 30” — were initially accused of piracy, a charge later changed to hooliganism, and detained for two months before being bailed and then benefiting from a Kremlin-backed amnesty.

Russia handed the ship itself back last year.