Scurvy Afflicts The Poor And Homeless 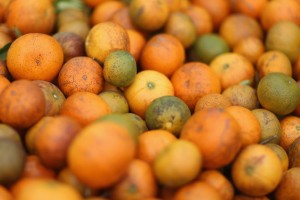 Scurvy, a disease caused by a severe lack of vitamin C in the diet, is most often associated with 17th-century pirates. But cases of scurvy still appear in the United States — and doctors say its 21st-century manifestation is a disease of the poor, homeless, college students, and those living in neighborhoods in which fresh, nutritious food is hard to come by.

A recent report describes two such cases among people living in a low-income housing unit. They were a 3-year-old boy and a 19-year-old man whose meals lacked fruits and vegetables.

They came to the attention of Dr. Karl Meisel, a stroke specialist at the University of California, San Francisco, because of neurological symptoms that included pain from light touch, vertigo, and weakness. But the patients also suffered from bleeding, rashes, and swollen gums — all manifestations of vitamin C deficiency. The symptoms improved once the two patients started taking vitamin C supplements.

“There is a population that is vulnerable to developing scurvy,” Meisel told STAT. “But it’s probably unrecognized.”

The condition is showing up in populations that are often cut off from adequate diets. In addition to the low-income housing residents, Meisel found seven other cases in rural Michigan. While these cases don’t necessarily indicate a resurgence of scurvy, where and how this old disease is turning up says a lot about nutrition in America today.

Low-income families, those living in so-called “food deserts,” and homeless people are susceptible to not getting enough vitamin C in their diets. According to a Centers for Disease Control and Prevention study published in 2009, 10 to 17 percent of low-income people suffer from scurvy-level vitamin C deficiency.

“We feel like we’re practicing in a developing country,” said Dr. Sarah Kawasaki, director of internal medicine at Health Care for the Homeless in Baltimore, who was not involved in the study. “That they aren’t getting vitamins in their diet is unconscionable, but in our work it can be a reality.”

Kawasaki said scurvy is often mistaken for other illnesses and can go misdiagnosed for months. “It’s so rare to hear about vitamin deficiency in this country,” she said. “It’s not on our radar.”

Meisel hopes his study, which appeared in the journal Neurology: Clinical Practice, will help to change that. “Now, when patients show up with vague symptoms, doctors have to think about taking a diet history,” he said.

For her part, Kawasaki now does a full workup on her patients. “I do the whole thing,” she said, “vitamin C and all.”