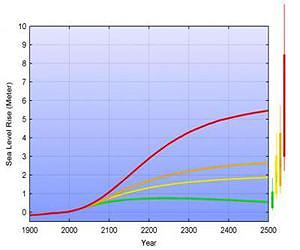 Rising sea levels in the coming centuries is perhaps one of the most catastrophic consequences of rising temperatures. Massive economic costs, social consequences and forced migrations could result from global warming.

But how frightening of times are we facing? Researchers from the Niels Bohr Institute are part of a team that has calculated the long-term outlook for rising sea levels in relation to the emission of greenhouse gases and pollution of the atmosphere using climate models. The results have been published in the scientific journal Global and Planetary Change.

“Based on the current situation we have projected changes in sea level 500 years into the future. We are not looking at what is happening with the climate, but are focusing exclusively on sea levels”, explains Aslak Grinsted, a researcher at the Centre for Ice and Climate, the Niels Bohr Institute at the University of Copenhagen.

Model based on actual measurements
He has developed a model in collaboration with researchers from England and China that is based on what happens with the emission of greenhouse gases and aerosols and the pollution of the atmosphere.

Their model has been adjusted backwards to the actual measurements and was then used to predict the outlook for rising sea levels.

The research group has made calculations for four scenarios:

Even in the most optimistic scenario, which requires extremely dramatic climate change goals, major technological advances and strong international cooperation to stop emitting greenhouse gases and polluting the atmosphere, the sea would continue to rise. By the year 2100 it will have risen by 60 cm and by the year 2500 the rise in sea level will be 1.8 meters.

For the two more realistic scenarios, calculated based on the emissions and pollution stabilizing, the results show that there will be a sea level rise of about 75 cm and that by the year 2500 the sea will have risen by 2 meters.

Rising sea levels for centuries
“In the 20th century sea has risen by an average of 2mm per year, but it is accelerating and over the last decades the rise in sea level has gone approximately 70% faster.

Even if we stabilize the concentrations in the atmosphere and stop emitting greenhouse gases into the atmosphere, we can see that the rise in sea level will continue to accelerate for several centuries because of the sea and ice caps long reaction time. So it would be 2-400 years before we returned to the 20th century level of a 2 mm rise per year”, says Aslak Grinsted.

He points out that even though long-term calculations are subject to uncertainties, the sea will continue to rise in the coming centuries and it will most likely rise by 75 cm by the year 2100 and by the year 2500 the sea will have risen by 2 meters.