Sea of Galilee drying up 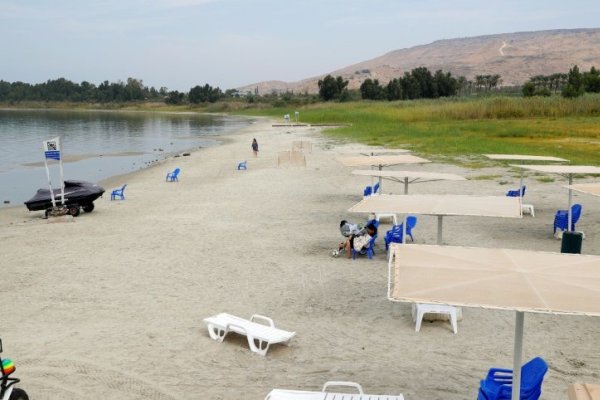 A dwindling water supply in the Sea of Galilee is pushing Israel to increase its use of desalination plants, with plans to expand two facilities and build two more by 2010. The biblical body of water is 16.2 feet below its lower “red line,” which marks the point at which it is ecologically inadvisable to draw water, according to the Israeli Water Authority.

Yet Israel continues to draw water from Galilee, to drink and to irrigate crops, said Uri Shor, a Water Authority official.
“We have no choice,” he said.

The parched region rarely gets any precipitation from late spring to early autumn.
Even if the fall and winter downpours in coming years are heavy and frequent, researchers say, fallen water levels in the Sea of Galilee are likely to remain.
“This is the most serious crisis we have experienced since the state was founded 60 years ago,” said Avner Adin of Hebrew University’s agriculture faculty.
An internationally recognized specialist in water as a natural resource and in the technological methods of increasing the life-sustaining fluid’s availability, Mr. Adin also has conferred with Jordanians and Palestinians on ways to solve the shortage.
Those experiencing the most serious consequences are the Palestinians in the West Bank and Gaza Strip, where Israel controls much of the water supply.
“People get running water once every two weeks,” said Jamil Hamad, a veteran journalist, foreign correspondent and former editor of an Arabic-language newspaper.
He attributed the situation to “an infrastructure that is behind the times.”
The pumps and pipes used to extract water from Galilee, the region’s primary source of drinking water, were installed by the Jordanians during the 19 years when they ruled the area and by the British authorities who preceded them.
There was relatively little modernization since the Israeli conquest in June 1967, despite the steep increase in the number of inhabitants and water usage since then.
Israel agreed to help supply water to the Palestinians under the Oslo Accords of 1993.
The U.S. Agency for International Development has allocated $50 million over a five-year period for water and sanitation projects that would benefit “needy communities.”
American Near East Refugee Aid (ANERA), a private organization, will carry out the project, with plans to lay new pipes, repair existing ones and build new pumping stations.
“Its infrastructure dates back to 1972 and has rusty pipes and whose water leaks into the ground; we must repair the main line to assure adequate distribution,” said Jamal el-Araf, the ANERA program’s chief based in the West Bank city of Ramallah.
Zafrir Rinat, an environmentalist who writes for the daily newspaper Ha’aretz, predicts that the country’s date palm plantations will be reduced in size and may disappear altogether.
He also is pessimistic about the vast citrus groves that blanket the coastal plain and extend northward to the foothills of lower Galilee. His forecast is that they too will be reduced in size.
Israel has two large-scale desalination plants, one at Ashkelon and the other at Palmahim, both on the Mediterranean coast.
The Ashkelon and Palmahim installations are based on a reverse-osmosis system that produces potable water, but at a high cost.
Two plants are under construction at Ashdod and Sorek, also on the Mediterranean coast, and are scheduled to go into operation by the end of next year.
The Ashkelon and Palmahim facilities also are due to be expanded so that Israel’s entire water requirements will be met by 2020, said Mr. Shor of the Israeli Water Authority.
Mr. Adin welcomed the construction of the desalination plants but warned that the expansion may not be enough because of long-term climate changes.
“We have been well aware of the climatic problems we face in this subtropical region, and we developed technological methods to cope with them,” he said. “The problem is that we did not muster the requisite funding and appropriate management.”
At present, 75 percent of Israel’s urban sewage is treated for reuse in agricultural irrigation.
“We are the world’s leader in this effort,” Mr. Adin said, noting that the runner-up, Spain, recycles only 12 percent of its urban sewage.
“But we can do even more,” he said.