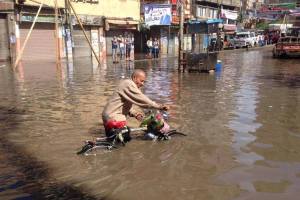 In a sudden and swift change of weather across Egypt, the coastal city of Alexandria has been suffering from continuously pouring rain and hail since Saturday night, leaving the city streets drastically flooded.

The condition, however, escalated quickly, causing more loss than that of damaged stores and private property. In the midst of the heavy rain, a power cable feeding the tram line in Moharram Bey was reported on Sunday to have fallen in the rain water flooding the streets, causing seven people and a horse to die of electric shock, reported Youm7.

Drowned in rain from rim to rim, Alexandria was left in paralysis, where citizens found great challenge to move across the streets, while ambulances failed to reach the victims in time.

Despite the recurrence of heavy rains in Alexandria during the wintertime, the city remains unequipped with a proper drainage system to overcome the consequent floods which damage the streets and stores. This caused many citizens to express their utter anger at the governor of Alexandria, Hany el-Messeri, for failing to prepare the city for such foreseeable weather conditions, as shown in a circulating video on the social networks.