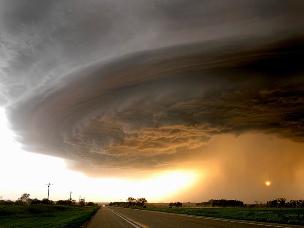 LOUISVILLE, Ky. — Heavy thunderstorms fed floods in Kentucky and Indiana on Tuesday, shutting down a university campus in Louisville, closing highways and cutting power to thousands of people.

The storm shut down the University of Louisville, where about a dozen buildings were without power and a dozen more had some flooding on the main campus, said university spokesman Mark Hebert. Dozens of university of employees were evacuated, he said.

Floodwaters gushed over guardrails on Interstate 65, bringing traffic to a standstill in Clark County, Ind., across the Ohio River from Louisville.
National Weather Service hydrologist Mike Callahan said the Rubbertown area in western Louisville was swamped by more than 6 inches of rain in three hours Tuesday morning. Callahan said the slow-moving storm “went right into Louisville and just sat there.”
Craig Buthod, director of Louisville’s public library system, said 3 1/2 feet of water inundated the main library’s lower level. He said tens of thousands of books were lost and the library was forced to close. He said staff vehicles and bookmobiles were also flooded.
City officials said there had been no reports of significant injuries.
In Indiana, police and state conservation officers rescued several people, mostly stranded motorists caught in high waters, said spokesman John Erickson of the Indiana Department of Homeland Security.
Duke Energy reported more than 24,000 customers without power just after noon, including nearly 14,000 in western Indiana.
A flash flood warning was in effect into the afternoon for Louisville and other parts of the metro area, and forecasters said the region could be hit by more thunderstorms in the afternoon.