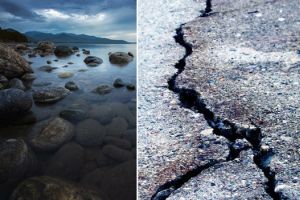 A WAVE of unusual seismic activity has prompted fears that a catastrophic earthquake could be on its way to Siberia which could TEAR Europe and Asia apart.

Scientists have predicted the earthquake could cause widespread devastation after more than 50 major tremors have been recorded around the north of Lake Baikal – the world’s deepest lake.

Many scientists believe the constant activity in the region will eventually lead to the entire Eurasia continent being ripped in half.

The tremors have varied in magnitude from 3.0 to 5.0 on the Richter Scale.

Experts from around the world have been monitoring the situation, with some warning the whole Baikal rift zone in Siberia is going through a phase of rising tectonic activity.

Such activity can take place every 50 to 60 years according to scientists, with a quake potentially having a disastrous impact on towns and cities in the area.

Experts have even speculated that the constant seismic activity will lead the Eurasian land mass being torn in two at Baikal in 650million years.

Gennady Tatkov, the director of the Geological Institute, of the Siberian Branch of the Russian Academy of Sciences, told the Siberian Times: “The previous cycle of the Baikal rift’s seismic activity was in the middle of the 20th century.”

Several major earthquakes were recorded in Siberia in the 1950s – including a level 11 quake in north Buryatia and another in Severomuiskoe which resulted in a maintain ridge shifting by 1.2 metres.

In 1957 a earthquake caused a mountain range in Mongolia to rise by more than eight metres, prompting a very rare natural phenomenon called the Tormkhon formation – a stone ‘wave’ spanning ten metres high.

A massive earthquake measuring 7.8 on the Richter Scale in China’s Sichuan province, also resulted in the formation of more than 30 lakes in mountain valleys.

The world’s most powerful earthquake at 9.5 on the Richter Scale was registered in Chile in 1960, leaving 4,485 dead and another 2m homeless.