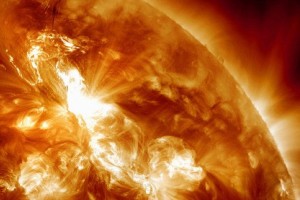 Planes were grounded at some of Sweden’s busiest airports on Wednesday afternoon because of a “solar storm” interfering with air traffic control radar systems, authorities said.

No aircraft were allowed to take off from airports in southern and central Sweden due to a massive geomagnetic solar flare storm causing problems for radar systems.

Ulf Wallin, press spokesperson at Swedavia, the organization managing Sweden’s airports, told TT that airports at Landvetter in Gothenburg and Arlanda and Bromma in Stockholm were affected.

“Those airplanes that are in the air are allowed to land at the airports they’re going to, but no planes are taking off,” he said.

The problems began at around 3.30pm on Wednesday. An hour later, traffic had begun to return to normal, but it was not known when airports would be operating at full capacity again, said Per Fröberg, press spokesperson for Luftfartsverket, responsible for air traffic control in Sweden.

“[The solar storm] has meant that we haven’t been able to see the airplanes on our radar screens. We are starting to get the systems up and running again but it’s unclear when everything will be back to normal,” he told the Aftonbladet tabloid.

Solar flares are bursts of radiation emitted from the sun during a geomagnetic storm. If powerful enough, it can disrupt satellite-based communications, including radar and GPS systems. In 2003 a similar storm caused power blackouts for thousands of homes in southern Sweden.

The Swedish Armed Forces said its own systems had not been affected.

“We have been given the information for our reference, but we have separate systems and have not been affected at all,” spokesman Johannes Hellqvist told Aftonbladet.

Heavy delays were expected for air travellers for the rest of Wednesday afternoon and evening.