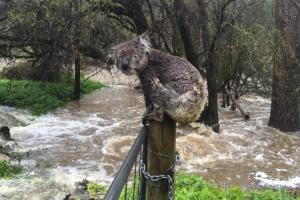 DAZED and confused, this soggy koala had just been rescued from the middle of the road.

While the worst seems to be over for flood-hit South Australia, yesterday saw the state battered by heavy rain and wild weather — and this little guy was caught in the crossfire.
Russell Latter had been driving along Old Carey Gully Rd in Stirling, a town in the Adelaide Hills, when he spotted the moist marsupial and came to the rescue.

“He was all right, I found him sitting in the middle of the road, I coaxed him out of the way so he didn’t get run over,” Mr Latter told news.com.au.

“He was a bit lost and confused.”
Mr Latter watched as the koala walked over to the fence, pictured, and became “quite excited” after he smelt the fence and climbed to the top.

“He had a rest up there, then he climbed down, crossed the flooded creek and found a big gum tree that he knew.”

Mr Latter can’t quite believe his luck at the iPhone image that has been seen across the globe already.

Considering it was his first ever post to Facebook, he considers the attention “kind of freaky”.
“It was their first time I’d ever used Facebook, I’d never ever typed anything in other than happy birthday,” he told news.com.au.

“I had no idea what to do, I’m getting all these requests to open Facebook messenger, I don’t even know what that is.
“It’s exploded.”